Zurui is a roleplayer and avatar creator in VRChat. They are perhaps most known for portraying Lycan Zurui.

Uno is a recruit of Aegis. She is a blacksmith with a small black pudding companion Ooze.

Tobias is an imaginary friend, and a member of Pathfinders.

Exzio is a half demon, half elf enchanter in Arcadum’s Forbidden Knowledge RP

Ais Hestia is a demon who intends to make the dark world of Callous Row a little Brighter with her sweet's shop named Happi.

Friend is a familiar in search of a master. In the dark and dusty alleyways of the row, she finds food from dumpsters, takes long naps to gain what little strength she has, and shies from passerby's. Hiding from all who may harm or manipulate her, she tries to get by in Callous Row.

She was born a Lycan who later married Lumi, became known as a Lycan mother and a close friend of MoxiMox who was turned into a Lycan. Zurui no longer plays Lycan Zurui. 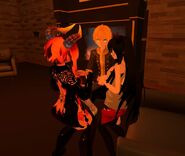 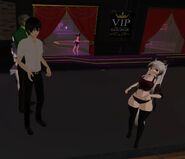 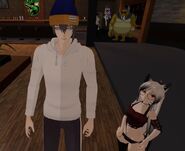 Arguing with Meech and his potty mouth

Outfit while visiting The Platinum Meechler

Outfit while visiting The Platinum Meechler 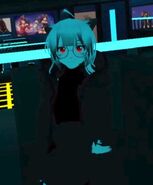 Talking to Chipz at the Neko Nights Night Club
Community content is available under CC-BY-SA unless otherwise noted.
Advertisement