Brown
Zackary Fang is a lycan and brother to Lila Fang. Both siblings attend Ascension Academy together. He is a very outgoing individual often compared to a dog for how excitable he is. He is played by Kazuki.

Zack was born a Lycan unlike his sister Lila who started life as a human. At some point in his life Zack was captured and enslaved by humans eventually escaping. Zack and Lila come from a tribe of Lycans.

They transferred to Ascension Academy together along with Jixie (Stream date May 26th). Zack spent most of the day running around and introducing himself to the other students scaring Arbor and Speca. He revealed his Lycan beast form when he participated in a race when he was evaluated for Squad placements. [1]

After a training exercise where students were taught to sneak past a spriggan by Headmaster Kareeda Akyama Zack brings Lila and Jixie into the arena to train. [2] Zack transforms into his full Lycan form and tells Jixie to remove Lila's earring so that she may train to better control her own beast form. After Jixie removes her earring Lila transforms but is unable to resist the anger of the beast going berserk and attacking Zackary. The siblings fight each other off until Zack gets an opportunity to leave the arena with Lila locked inside. Zack informs the Headmaster of what has happened and says that he can turn her back with the earring. The headmaster allows Vanguard squad to deal with the problem themselves and they enter to fight Lila off. Zack gives Ryder the earring telling him to get it onto Lila. Ryder is bitten on the shoulder when he attempts to reattach Lila's earring causing the rest of the squad to attack. Augusta lets out a powerful yell as she wields ice magic and her greatsword, Kuroi Kage fires lightning magic off, and Melanie uses her blue flames. Zack tries to help but is unable to transform into his wolf form. The combat only slows Lila down and she becomes distracted by the scent of blood coming from Jixie. Lila runs over to Jixie to attack but is then captured in dueling barrier by Ryder. With Lila subdued her earring is placed back on returning her to normal in a severely injured state.

After getting the rest of Vanguard squad to the infirmary Zack goes to Lila to make sure she is okay. While looking over her Melanie storms in enraged that her squad was injured shouting at Lila. Zack in defense of his sister pushes Melanie against the wall holding her by her collar. Melanie slaps Zack and then runs off leaving Zack upset and reliving his trauma of being captured. The next day Zackary is taken aside by the teachers and given a demerit for putting the students in danger while being aware of the possible risks. [3] 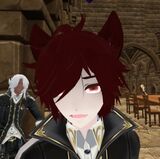 Zachary running in a race, while in his beast-like Lycan form. Minerva and Kareeda look on.

The Beast. Art by Layzzi Skipper.

Zackary in his wolf form. 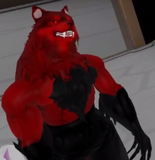 Zack and Lila arriving at the ball

Zack in the Hart Ball 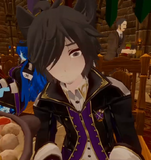 Ryder and Zack in the desert mission

ZAck, Ryder and Jixie outside their tent

Zack after the first test of the placements

Zack in his pajamas with Jixie

Zack eating in the Aldoria camp

Zack convincing the Headmaster about the Vanguard tower

Zack with a Baguette

Zack hitting Lnik with a Baguette

Zack and Jixie in glamour Day

Zack on the main hall

Zack shots flare to the floor

Zack setting up the tent

Zack in his combat uniform

Zack refusing to give blood