Xion Eros is a half-elf Street Samurai who wanders the Wasteland. His sense of honor being the only constant in his wandering lifestyle, he considers himself a Ronin, moving from place to place and helping those he comes across, all the while looking for someone who can prove themself honorable enough to serve.

Outside of his wandering lifestyle, he has a habit of collecting stories of those he comes across to keep him company in the times when he is alone. He never backs down when he believes honor is on his side, never backing away from a fight against a dishonorable individual.

To Xion Eros the Raikiri way is everything, wanting only for stronger opponents and an honorable lord to serve. 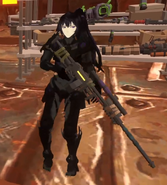 Retrieved from "https://vrchat-legends.fandom.com/wiki/Xion_Eros?oldid=96459"
Community content is available under CC-BY-SA unless otherwise noted.