Xia Morningstar is the courier for the Row. If you need to find someone or need a message delivered, she's your woman.

If you need information, you better be willing to pay big. This drow has a large assortment of acquaintances and business partners from the lowliest Wastelander to the uppercrust of the Uppercity. If you want to find her though, you'll have to be quick and know the right people. Xia's been on the go since before she joined this cesspool a year or so back and hasn't stopped running.

Within her, she holds secrets that can make or break this city if it doesn't break her first. She totes a bad attitude and a biting tongue and that's to people she likes. Arriving, she wanted nothing more than to grab the credits she could and leave but things are changing. She is changing. Her emotions are building up in her like lightning in a bottle, ready to pop off and explode but, when you run so fast and for so long, will anyone be there when your world comes to a shocking stop? Bold[1]

Xia was born and raised in some slum. Her father is unknown to her. Her mother was sickly and eventually died when Xia was young. She grew up on the streets doing whatever odd job she could to get by, scavenging and stealing to make ends meet. Eventually, she started running drugs for a dealer and started gaining a reputation for her services. The money was good for a bit, but when the dealer was offed by a rival, Xia knew it was time to find a new line of work. She branched out and started acting like a “mailman” of sorts for her slum. She’d deliver parcels, messages, and other paraphernalia. She tried to steer away from the less lawful commissions, but credits are credits. Xia tried to work for the TraVerse Corporation as a legit transporter but botched one of their jobs by accidentally blowing the client’s eardrums out when he pulled a gun out on her. Since then, she’s been traveling, lying low, and trying to suppress her magic even more.

Xia is the second courier to move into The Row. She set up her own delivery service in the same place Oriana ran hers before she passed away. She is currently using the Row as a place to lie low.

Like before, Xia moved to The Row to lie low after a botched delivery job elsewhere. She still ferries mail, packages, and information throughout The Row's upper and lower cities. She has even begun working with Charles, the butcher, to deliver into the Wasteland and, when she has clearance, to the Corporate Floors. Xia also continues to hide her magic to the best of her abilities due to her previous experiences with magic and its users. Despite her occupation, her secret dream of one day learning to pilot a ship and fly far, far away from the slums she was born in only grows stronger. 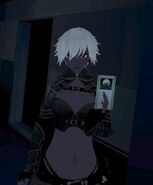 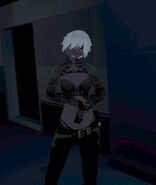