Note that this is not public knowledge

Female
To most X may be seen as a nobody, a misfortunate civilian or refugee from war sticking to the shadows who makes their living in Callous Row, the slums of Savior City, the metropolis city on the planet Corvanis 3.

For those in the know or street savvy however, X is an invaluable Identity Broker & Forger who knows how to turn a person's life around by giving them a second chance, free of debt or less indebted, by picking up the name of someone dead. She trades the rare commodities of digital identities or uses infiltration tech to forge new ones by inserting fake information into databases.

She suffers from mental trauma, has an explosive temper, and has serious trust issues.

Having a relatively 'normal' childhood, X was raised by her parents in a low-class area. Her father worked for the ATLANTIS mega-corporation and instructed X in ATLANTIS's identity tracking and usage of their comprehensive civilian database. He however struggled with their upkeep, and when X's mother came down with a disease, he took advantage of his access and began forging identities and implanting information.

In her teens, X's skills of Infiltration increased due to the huge amount of hours she would shut herself in, surrounded by nothing but technology.

The database forgery activities were discovered when ATLANTIS was contacted about the deletions of a celebrity affair that was scooped by another network. ATLANTIS tracked the breach back to X's father and dispatched a Street Samurai assassin to correct the problem. X discovered the hit order too late to save her father and arrived to discover her home destroyed and her father murdered. Swearing revenge, she set out to become one of the foremost identity forgery experts and work her way to discover who it was who murdered her father.

She was paid by Rook to forge a new identity for Alfons after he cut his ties with the corporations.[1]

Note that this is not public knowledge

Creeping up on Rook in The Dirty Diamond brothel 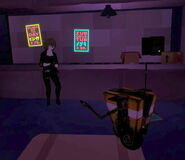 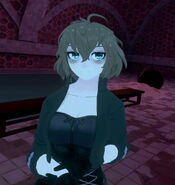