Not to be confused with: William

Willixir is a roleplayer who portrays a wide arrange of characters and personas and is known for his supporting roles in Callous Row RP.

He does not use any dedicated avatar as his OOC, hangout or default model, and constantly changes avatars from time to time.

A creature that hails from the hostile Wasteland outside of Savior City and Scrap Town. The creature seems strangely docile and has befriended Sheila, a shaman and local to Scrap Town. It has been named "Crabby" by Sheila.

Since its involvement it seems to have befriended more locals including Ryzy, Ash and Sir Polka.

When the creature tried to enter Scrap Town in episode 3 Sten attempted to shoo it away, firing multiple warning shots. Eventually more gathered and it became clear the scorpion was not hostile at all and Sheila's friend. She would later introduce it to him and many other citizen of Scrap Town.

On Episode 23 Sheila ordered armor to be crafted for him from Sten and Mr Prowler. Completing that the huge Crabby would effectively turn into a tank.

An envoy for Lady Shinohara he assisted as the greeter when she delivered "free water" to the wastelanders of Scrap Town in Season 2 Episode 3.

Another scorpion, this time not very friendly which makes its den somewhere out in the wasteland. It cornered and attacked Mayor Rico at the oasis, cutting of multiple of his tentacles and carried off his dehydrated and bloodied form to its den to try and feed its young. Multiple caravans attempted to save him but failed and were chased off by the imposing creature.

The mayors fate was in the hands of the remaining Wastelanders who knew of his disappearance. A GPS tracker located in one of the mayors drawers could find him but it was destroyed by Anthony, probably because he was banished by the mayor for his involvement with the Atlantis corporation. The Scrap Town locals eventually managed to rescue him but he later escaped the hospital after Scrap Town voted in a new council to rule in his stead.

A sole survivor of a mercenary band. He came walking into Scrap Town one day, dehydrated and confused he met Sten and Wit after which he was provided with food and water from Shiloh and Jyggal.[1] 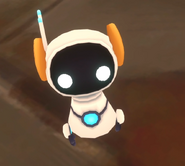 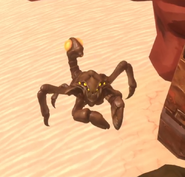 The scorpion starts fiddling with a tower at the city entrance

Rescuing Duncyn after the synth uprising and Titan incident

Ridden by both Sheila and Polka

Mediating with Sheila for safe passage through Bramble Canyon