Warren Crassus is an ex-corporate weapons and technology researcher as well as a soldier who now makes his home in The Row, the slums of the massive metropolis of Salvation City.

An undying loyalist to the ReUnion cause and close friend to Loch, he will make any sacrifices necessary to free the planet of corporate control. He hopes only to retain his humanity while furthering his own goals.[1]

To say that Warren is fascinated with technology would be an understatement, he is rather obsessed. Patiently studying something to figure out how it works he absorbs its workings like a glutton might consume candy. Technology to him is the wonder of life, in the past, the future, and the now - and he aims to evolve and better himself to become part of it. His wish may be folly, but he aims to develop augmentations and become an avatar of progress himself. He won’t be the meathead that he looks and would rather be the genius he aspires to be, and he will stop at nothing to get to that point.

A solid proof of his obsession to 'better himself' is his helmet, his prized possession and creation. While it doesn't contain any augmentations integrating him as a cyborg, it contains a toolkit of various gadgets from automatic adrenaline injectors and rebreather filters to a computer with specific voice commands and remote managing. He is able to remove his helmet but rarely does and most likely dislikes to do so.

Salvation City is my home. I was born and raised here, in the slums. You have people of all kinds of races living just inches from you, probably following whatever profession gets them by. Much is wrong with this city, little is right...but my life has had but little impact on it as I grew up.

Born a boy to a family of almost entirely women, save for my older brother, I was often times the least of my parents’ concerns. In my family, my father was kind of an ass, he would try to hurt my mama, but it would come to be that she got sick of him. One day my mama hit back, and he turned tail and ran. That same day he got shot and died, guess he went out drinking and picked a fight he shouldn’t have. We did shed tears for him, but we moved on nonetheless. Life isn’t too great in Salvation City, when someone dies you tend to move on pretty fast, after all, death is incredibly common here. I had five sisters and my older brother, looking after me with my mama. I was the youngest, so obviously I had attention, my brother was...neglected. A lot went to his head, he didn’t last long out there. More on that in a bit.

My mama? Mama was harsh on all of us, regardless. It was all for the greater good, my sisters turned out to be badasses of course. Mama was a strong woman and damned be if my sisters didn’t turn out just as strong as her. ‘Course, they did either way. I was taught by her to never hurt a woman unless you absolutely must. Don’t know if that makes me soft but I honor those words...best I can. Back to my brother, he died seven years after my father did. I guess everything just came and clouded the poor man, he had a real drinkin’ problem and went down just as my father did. Had a fight he couldn’t win...and didn’t win. I then became the only man in the family, but it wasn’t one of those…”You’re the man of the house now”, nah...I will always be their baby brother. My sisters and mama raised me until I was a man. Moment I became a man, I left home and moved on with my life. Jumped almost immediately into mercenary work, but worked a lot with tech, much as I could muster. Being a mercenary reminded me of how my sisters taught me how to fight, don’t back down unless you know you can’t take any more heat. Retreat was very little an option, and people were always shootin’ at ya’ around here.

Of course, after leaving home I had nothin’ but memories of my training and my sisters because I hadn’t seen them in so long. I write to my sisters to make sure they’re doing okay. Family will always be, family. Anyhow, with my talent with technology, I decided to put it to use. My mercenary work also paid off...I met a contractor from Shometsu, they signed me on and...I worked for them. Maybe this is how my world changes…?

Warren was forced into a workshop by a group of corp mercenaries. To overcome this situation, he decided to take the tools and scrap inside this workshop to construct a few traps before they broke into the workshop to kill him. He used his smarts and strength to turn the tide, and in the end the mercenaries were killed by his traps and he went home, completing the mission he was sent on.

He once was sent on a mission with a couple of friends to deal with a group of corporate mercenaries that were doing some dirty business to harm their presence. They set a singular trap for them, which ended up being faulty technology that didn’t work. This failure got his two friends killed by the mercenaries and since he was not protecting himself well enough, he got injured and was forced to retreat.

Found on Youtube is a video called 'Scars' on Veinhelm's channel. This video was produced to depict the ongoing and gradual struggle that Warren has with his number one psychological hurdle; His Father. The very origin of Warren's Major Flaw, Memory's Past* is from long ago.

When Warren was sixteen years old, his Father and him were left at home while his mother, sisters, and brother were out and about, doing work or shopping around the slums. Warren's Father, named Davon Crassus, took Warren with him to go speak to a TraVerse Corporate associate. His father at the time was working with TraVerse but through joint work, unregistered in their papers but still to make decent money, to support his family. This Corporate Associate was a low branch in the tree that was TraVerse as a whole. Apparently, this man found Davon to be quite relatable and likeable, whatever that would mean for corporate. So he wanted to extend an opportunity to Davon, when they had met, Warren had expectations that the man would be nice or pleasant to a degree. This was wrong, the man was rude, insulting, and practically spat words that were sharp yet went right through Davon, taking it like he was a pincushion. Warren could've cared less, until the man made crude and unforgiveable comments about his sisters. Something that of course, warranted a nice right hook to the face. The man came close to striking Warren back before his father grabbed him and immediately started begging with layered apologies, as if the man's words never came out of his mouth. The man shrugged it all off and walked away without a word. An hour later, when they returned home, Davon walked into the next room. The walk home was quiet and it made Warren quite nervous. It was out of impulse, he struck the man because his words were nothing to ignore.

The next day came everyone had left again for their day of work, still it was just the two of them home. Then as he is walking passed his father's room, he hears him call; "Warren? Is that you, son?" Warren hesitated, thinking for a moment. His father called out again; "Come on in, I wanted to talk about...yesterday." Warren opened the door and walked into the room, and closed it behind him. His father walked over to the door and locked it behind him, he gestured to take a seat next to the bed. He stood over him and was stern, clearly was still angry about the day before; "I had faith in you, but your mama was wrong about ya'..." He felt no shame for what he did, but those words struck him deep. "You costed us our one chance to get out of the slums!" He walked over to the bed and grabbed something that was sitting on the bedside table. He turned to him and held it in his hand, a blowtorch. He lit the blowtorch and grabbed Warren by neck, their struggle pulled them onto the floor. Warren was smaller then, his father was larger. His father pinned him to the ground and held the blowtorch in his hand as it got closer to Warren's right eye. "This is gonna hurt you, far more than it is gonna hurt me...heh." Warren was petrified with fear, nothing left his mouth, not a single word. "And when this is done...the suit, might...reconsider. He wants you to suffer for...eh...insubordination...hahah!" With that cackle out of his system he started burning, one line after anther into his face, over his eye. His laughter filled the room and Warren's screams of agony followed in kind.

When it was over, he did nothing but hold his face and curl up against the wall, tears never left his eyes quite that much before, with such pain coming with them. Warren's mother, June, had gotten home with a couple of his sisters who were without jobs at the time. His mother kicked open the door and his sisters guided Warren out of the room. June, being who she was, was not going to let this go. She screamed and yelled at Davon for what he had done to their son. He had enough of her words, and struck her with the back of his hand. What came next would be a surprise only to those who didn't know her well, she would plant her left foot sturdily and take her right foot and swing it around and kick him so hard in the face that he was off his feet and sideways within a second. He struggled to get up and he ran out the door, yelling curses at her and Warren as he left. After that day, they didn't hear from him again, as he died that same night when he was out on the town.

The events that day would stick with Warren for the rest of his days, any burn to him or anyone else, would remind him of that moment. The pain, the trauma, the hate. Sometimes, he can see his father, watching him. Haunting him.

Guided tour around The Row by GU1D3-B0T along with Johnny TAX-1, Celeste, Desmond and Eros. 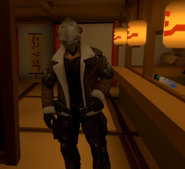 Nash and Warren assists Loch after he got shot

With his helmet on, visiting Scrap Town 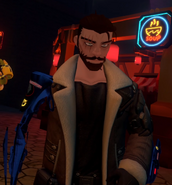 Warren without a helmet 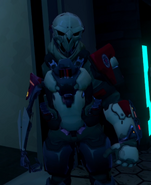 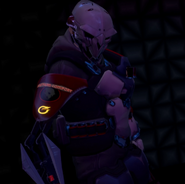