War-Togg is an ettin which means he has two heads with each head controlling their side of the body. War is the left side and Togg is the right side. War is happy and friendly while Togg is grumpy and cold. War loves to smash things and Togg likes to learn.

War-Togg was abandoned shortly after birth and for most of War-Toggs life they have lived on their own in the wastes. Both brothers have taken up different goals and hobbies throughout their life. A few months before they entered Scraptown, they got into a particularly heated argument which led to War tearing off Togg's arm off. War, feeling bad, replaced Togg's arm with a new mechanical arm with a blown up rubber glove as a hand. The hand does not function at all. More recently War-Togg have stumbled their way into Scraptown and have both agreed to give this new life a go. 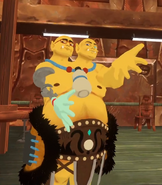 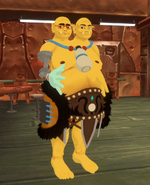 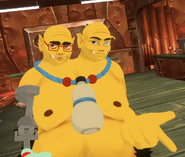 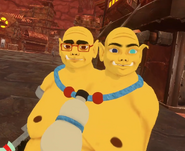 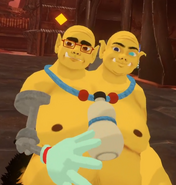 Purchasing a bat from Sten
Add a photo to this gallery