Red
Voxine has made her new home in the undercity. Formerly a synth designed only for murder and intelligence gathering, she's looking for a new lease on life in a world that doesn't see her as a person, but property.[1]

Voxine is a war era infiltration and assassin synth. Originally built by the Shometsu corporation. On her last mission an explosive she planted went off too early which caused her target to escape and the Fleet to walk straight into an ambush. The corp presumed voxine had been destroyed during the initial explosion and with the subsequent battle being lost. Communication codes were changed and she had no means of contacting her creators for extraction. she was abandoned.

She managed to power herself down in a crashed cargo ship in the wasteland, where a few years later she was found by a scavenger on the run from a band of merc’s. The scav accidentally triggered her combat system and she slaughtered the man before he knew what happened. The mercs burst into the ship seeing the scav cut to ribbons Next to this synth with blood soaked blades attached to her arms. Scared, they were ready to destroy her on the spot. But their leader stopped them, Instead he offered her a job, which she accepted.

The following years she spent with the group as they took on minor mercenary work all over Hellion. The group was composed of magic users, and would often use their spells during operations. Fascinated by magic and how effective it was in their work. Voxine spent Years observing and documenting the phenomenon. much to the dismay of her teammates. concluding that she had learned all she can from her team, she left the group and instead pursued new leads which led her to the lower levels of Salvation City.

Using a contact from her mercenary days she is now attempting to establish herself as a fence in The Undercity. Close to the magic users and rumors of spirits and other creatures. using her contacts and abilities to acquire magic items, spells and information and make this place her new home. 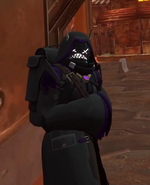 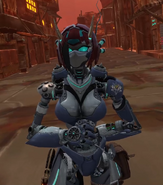 Visiting Scrap Town, speaking to Sten the gunsmith about her "pawn shop"

Spying a shootout around the corner in Scrap Town