Who the heck is Vigor?

That is a really good question. He is a famous VRChat personality who used to regularly play with many other characters in the game. He participated in a great deal of roleplay and is without a doubt one himself. If you ask him he will probably deny it and call other roleplayers 'nerds'.

He is known to start arguments or weird antics related to defending his 'e-peen' or putting himself through a mix of insults aimed at typical gamer issues. Sometimes self deprecating but usually aimed at other people. The common topics are poor luck in the relationship department, joking about female behavior or putting women on pedestals of worship ironically.

If ever something could be done properly or seriously, Vigor would be there to rebel and do the exact opposite in a silly way contrary to what social conventions dictate.

Vigor is a strange character who usually stands in the metaphorical doorway of breaking immersion, having one foot in-character and the other out-of-character. This makes this wiki entry a strange mix of both RP and non-RP in an attempt to create a coherent narrative.

If he is serious or just plays silly is a matter of debate but if you meet him its generally a good idea not to take him seriously.

He identifies as an incel, someone who is involuntarily celibate with a distaste for womanhood in general as well as a furry, someone who likes humans with animal characteristics or vice versa. Where the line is drawn on that scale for him is uncertain as he often makes dubious claims about it.

Since early 2018 his visits to VRChat are very rare, but generally he is spotted visiting Roflgator and the Gator RP Group lobbies.

History of the character

His character can be mean and insulting but whenever he expresses his insults he does so with irony and a glint in his eyes.

During his early days of VRChat in January of 2018 he used to hang with Vince, Pokelawls and Team Five, also visiting The Great Pug RP Collective when Chipz and Nuts were regulars visiting Roflgators bar in The Great Pug. He met Chipz during one of his public serenades before they started roleplaying. Eventually he accused Chipz of stealing all of the women in VRChat with his singing.

Chipz attempted to pair him with Monika a couple of times but it never worked well.

Although often proclaiming (in jest) how much he hated Monika she and Vigor established some kind of weird RP relationship. It was probably just silly antics and eventually ended up in a really scuffed wedding attempt on Feb 22nd, 2018. Their characters never actually got married and the wedding was interrupted.

Highlight: Vigor objects at his and Monikas wedding

Having a massive 'e-peen' any conversation initiated with Vigor usually ends up becoming a discussion or argument related to his gaming skills in various PC games. Usually Black Desert Online (BDO) or PlayerUnknown's Battlegrounds (PUBG). If you're unlucky he might even challenge you.

He supposedly had some kind of competition in BDO with DefinitelyEgg and won.

While most 'mutes' in VRChat have a tendency to eventually do a voice reveal and start talking, Vigor decided to do the exact opposite.

After being warned for his sometimes offensive jokes in his roleplay he decided on Feb 10th that the only solution to avoid being banned was to become a mute. (mostly as a joke) He held out for almost an entire week with the exception of unmuting temporarily to argue and yell at Chipz.

He eventually created another account named 'Rogiv' on Feb 14th, 2018 to be under cover. While using this account he acted very unlike his own character seemingly calm, kind and not argumentative at all.

While he and Nuts were in a relationship IRL they also made it in-character for the roleplay and married at the chapel of Blue Man in The Lair of Roflgator on June 7th, 2018. They were officiated by GreatKhan.

Return to VRChat & The Golden Gator

After a long hiatus he would return to VRChat at the end of Sept 2018 following the new patch allowing users to once again visit public worlds without being constantly harassed by 'crashers'.

In October 2018 he's occasionally been seen visiting The Golden Gator together with Dyrus and participating in various social games such as 'Quirks' and charades. He's also done some light-RP and various antics that involve yelling and commanding people to do as he says. He has a thing against the Bricktown Blocks and tried to form the ABC - The Anti Block Community.

On October 17th, 2018 he was put in charge of bathroom duty by Roflgator at The Golden Gator earning the title bathroom manager over Mute Max - the bathroom cleaner. His idea of performing his duties guarding the bathroom stalls instead resulted in him commanding it's visitors to perform degrading acts while threatening them at knife-point - offering circumcisions or worse.

He would make a return once more in 2019 visiting Roflgators bar The Golden Gator where he used the taser baton to try and arrest people and put them in jail. Unfortunately for him he mostly ended up capturing himself, mishandling the weapon. He would visit Roflgators bar Necro Nights which is a parody of another bar named Neko Nights. He would eventually make it to the real deal as well.

When he visited Neko Nights together with Roflgator on Sept 7th, 2019 he met the owners Lanfear and Oathmeal and managed convince Lanfear to invite TheBigMeech as well. He also saw Chipz again, met Kohrean, Assassin, LilBagel, Miss Minerva DH and many other regulars.

Being his first time he together with TheBigMeech got into the exclusive club they caused trouble by looking up some female visitors skirts. Out-of-character they were checking for allegedly sexual parts on avatar model that aren't allowed but their choice of language could probably have been better.

During his time there he kept trying to recruit players to join his guild in World of Warcraft Classic on the realm Faerlina. Although all the commotion caused the event was quite hilarious nevertheless.

On Mar 31st 2020 with Sodapoppin, both portraying loli characters they caused a stir. They got adopted by TheBigMeech as his two bratty kids. Roflgator and Vigor argued about Rob not being in the "S-lister streamers Discord" with Vigor wanting him to kiss his hand in order to get a letter of recommendation for being invited. After a while and some bickering back and fourth he was eventually invited by Soda.[1]

Often lamenting over his internet connection being too poor for doing any type of streaming it never stopped him from advertising and plugging it any chance he could get. Yelling out his Twitch channel URL became his slogan.

The whole ordeal grew into a bit of a VRChat meme and eventually people would spam other streamers chats with his address or tease other streamers by calling them "Vigor's camera men". To this day he appears to never actually have streamed on his Twitch channel. Rumor has it that he may have streamed once or twice, but deleted the VoDs; this is unconfirmed.

Explained by himself he lives somewhere in the middle of nowhere in a swamp and was once attacked by flying insects while online gaming with his friends that stream. 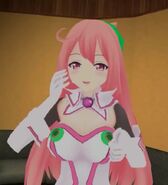 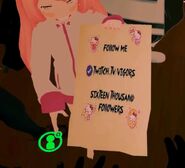 Shamelessly plugging his Twitch stream (that was never used)

The self proclaimed 'King Vigor'

Participating in social games at the Bricktown Golden Gator during Roflgators RP-card down event. 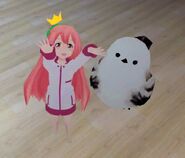 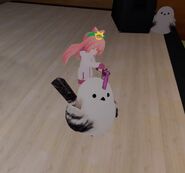 Vigor wielding the stun baton at The Golden Gator 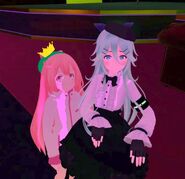 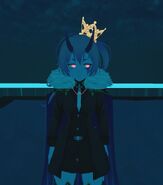 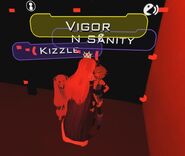 Trying to recruit Neko Nights clubbers to his WoW Classic guild on Faerlina. 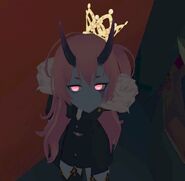 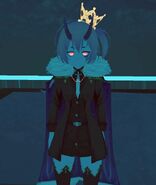 With Miss Minerva DH and TheBigMeech 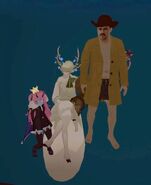 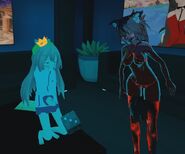 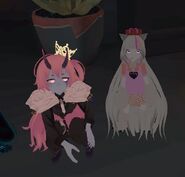 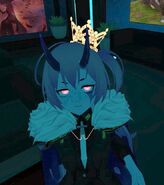 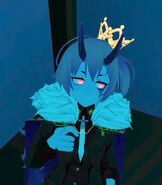 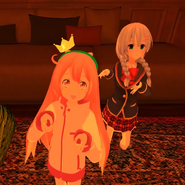 Vigor expecting Roflgator to kiss his hand for a letter of recommendation to the "S-listers Discord".

Rob giving in and kissing Vigors hand.
Add a photo to this gallery

Retrieved from "https://vrchat-legends.fandom.com/wiki/Vigor?oldid=94126"
Community content is available under CC-BY-SA unless otherwise noted.