White
Viana is a fortune teller living in the Undercity of Callous Row. She was part of the Dark Sisters faction under her teacher Ciara Ní Éabha, however she could not bring herself to be violent and Ciara detached her from it. Her purpose is to find a place in the world where she can relax and do nothing. She lives a lower class lifestyle being a magic user who avoids living on the surface. She is portrayed by Mama Bear.

She was born to a wealthy family in savior city that pampered her and treated her like a princess, until they realized she had psychic and magical ability. Her family is one of the big supporters of Nirvana and reached out to for help with this, the closest thing in reference they could tie her to was the mythical creatures called a Genie, some cultures call them Djinns, or Oracles.

Unknowing of how much she can really do they put a lock on her mind with help from other organizations and sent her off to live in The Row in order to make sure she is somewhere contained. to Viana's memory she believes she ran away from her family to The Row and only knows nirvana may have a part somehow and refuses to trust any Nirvana agent or corp.

Her memory has been damaged by someone and the only thing she can remember is her father and Nirvana. She believes her father found and kidnapped her but she can not remember what happened after that nor how she ended up plopped back into the undercity of Callous. her only lead right now is to figure out exactly what happened to her while avoiding Nirvana surveillance.

With the quarantine over Vi gets to see her old teacher Ciara and academic friend Kythus again as well as meeting new people who seem to be bringing more colorful auras to the gloomy city. Ciara gave her one last lesson which helped her remember why she loved being so curious about the world around her, but the Sanctum being looted only brought more worry to her mind. With her weird napping habits popping up as well she started stressing out about a lot of things. It seems she might need to figure out who she can trust in this city. There are a few people she has in mind, but she would like to watch them some more.

Viana reading a fortune in her tent. 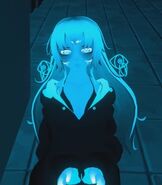 Viana speaking to GU1D3-B0T.
Add a photo to this gallery
Retrieved from "https://vrchat-legends.fandom.com/wiki/Viana_Kelesni?oldid=93782"
Community content is available under CC-BY-SA unless otherwise noted.