"The prettiest flowers are the ones that bloom in the harshest conditions. Like you." ― Vevina, to Chipz

Pink
Vevina is a Bugkin and student of Ascension Academy. She was raised as an envoy for Bugkin and humans and has the goal of showing that even Bugkin can be an ally to good.

Prior to being "ghouled" she had pink hair but after it appeared grayish white. After some time away from her "master" she appears to have recovered as the bond was never completely finalized.

She is portrayed by Miss Universe.

Vevina comes from a kingdom of sentient bugs referred to as Bugkin.

Humanity and Bugkin have had very hostile relations in the past even going so far as having wars where atrocious things were done on both sides. One of which was named-the torching of Vevina's very own homehive (homeland).

Vevina- despite the horrors she witnessed- decided not to hate humankin for this particular transgression among others, saying that "If we continue to hold grudges and look only to the past then this war will not end until one of us are dead". She believes that humankin and Bugkin can learn a lot from each other, and ultimately would benefit highly from each other if they only stopped feuding. She was also in a unique position to try and ease tensions- and perhaps even end it.

Vevina is the first with a mutation that allows her to trasmute herself into a humanoid form, a unique ability that allows her to walk up to mankind without them outright becoming hostile on behalf of their appearance. She can morph into her spideresque form at will where her spider-like qualities are far more enhanced. (Paralyzing Venom, wall climbing, Thread-making, among other things)

Because she has been raised to be an Envoy since birth she is incredibly well-versed in politics, social studies, and knows a fair deal about the surface-dwelling races history and cultures. This much has been very clearly displayed from how she interacts with some people, and even chided Barthall for putting himself in a position where people will actively try and oppose him and his sister.

She has also hinted that Bugkin have a fairly ruthless society where only the strong survive. Because of this, she respects every one of the students--even if some are not as intelligent as she had hoped. She ultimately wishes to see all of them succeed, but her actions with the drow twins were unfortunately misunderstood.

Being the first Bugkin of her kind to take on a more human like appearance, Vevina was admitted to Ascension Academy along with many other. She seeks to prove the humans who destroyed her home wrong by not being the monster they think she is and being successful in the academy.

She called librarian Alex Northstar a "racist" and retold how he had called her and her kind abominations that eat people. She was visibly distraught and confided in Chipz that the librarians just see her as a living monster manual, wanting to learn how to best kill her people. To him she also revealed that she would soon become "the real her". Her true form being that of an arachnid (a spider), meaning her human form is magical. After this she will be able to determine which of the people who see her as a friend - or as a monster. [1]

She would eventually reveal her true form first only to her fellow student Chipz. He assumed that she was changing into something more comfortable, with his leg rested on a couch he seemed to think that she would appear dressed in less clothing. Strangely enough once she revealed her true spider form to him, he did not seem phased, not even surprised.

She would later also show her true form to the rest of the students during a race at the university stadium when they were being evaluated for Squad placements. The majority of students reacted very positively despite that one might expect negativity as spiders are often upsetting to many. Chipz would awkwardly phrase and ask if he could "ride her" spider form, to which she said yes and took him for a ride climbing along the walls of the stadium. [2]

Not having fed for a while she explained to Victor that she needs to expel venom, otherwise her face starts to hurt. To do this she requires something something to bite into like a piece of leather or a plastic. Surprisingly Victor offered his hand saying that it wont affect him, instead of looking for an object to bite into. She told him that if she doesn't let go he will have to push her away. Vev obliged and bit in, liking it and purring while going at it, eventually he poked her to get her to let go.

By the end of the night she was gifted a bottle of "Fire Water" (alcohol) by Chipz to enjoy which gave her an interesting night. The effects of alcohol on spiders and her kind are a bit of a mystery since her kin doesn't consume alcohol at all. Down in the caves that they make their homes there is a lack of things to brew hence they never developed the culture to do so. Possibly downing the whole bottle the effects might have come as a surprise as it was strong spirits and she had never had alcohol before.[3]

The following day she woke up having snuck into Chipz bed with him waking confused and embarrassed as well as her being quite intoxicated. She was offered water and recommended to drink lots of it and go for a walk to sober up but she insisted on drinking him instead, pointing to his arm. Carried by Rook she made it around campus and to class. Not sobering up her squad mates were worried about her well being.

After their class of building a bridge over an obstacle Vondanen showed seeming concern for her well-being, although she lied and told him that she had been given blood from someone with green hair. Thinking someone else did something to contaminate her food and getting interrupted he got quite upset and moved her to the infirmary and started interrogating her classmates Speca and Chipz who covered for her.

After leaving the infirmary she teased Chipz of wanting to drink his "wrist water" to which he offered her to expel her venom in him as long as she didn't draw any blood. She took the offer and bit down on his arm, purring while doing so. Chatting she teased him for being flustered, as he stretched his arms above his head to show what he called his "dominant pose", Vev quickly disarmed any feeling of dominance from him by sneaking a kiss on his cheek from him, leaving him stuttering, even fleeing the scene. Later promising not to bring her alcohol any more she left Chipz even more flustered, telling him his hair is not combat-efficient but very pretty and tried to twist his words into meaning that he expected to have sex with her.[4]

She learned of a plot from Rook that Melanie McDaniel and Augusta Anders possibly plan to murder Victor Heinrich, promising to do all she could to prevent that if it were true.

Enjoying hugs from Ryder she taught him how to kiss on the cheek. He would later act the gentleman supporting her and flirtingly returned the kiss on the cheek the next time that they embraced.[5]

Recovering fine, seemingly having no symptoms from before from her past adventures exploring the effects of alcohol, the cat was out of the bag when Chipz and Speca tried to cover for her after much interrogation from the suspicious Vondanen.

She admitted to Chipz that she had actually feed upon some of Victors blood, not just ejected her venom. Chipz was shaken and explained that what she had just done was a terrible thing. In his words after a while you loose yourself and everything in your life will be filled with the person you drink from and his will becomes everything that you want. "Free will is gone and we control.", like a terrible drug.

Appearing fine for a couple of days her situation got from bad to worse, especially after being denied when she asked Chipz if he would embrace her. Hobbling into class she was dragged off for another of Von's interrogations where she eventually collapsed, filled with hunger and confused thoughts. After being treated in a return trip to the infirmary to little avail she escaped only to chase down, jump and cling to Victor, all while hissing and slashing at her classmates including Speca and Cari. Escaping another time a group from the school began chasing after her until she was calmed by Lila and Rook who convinced her to return peacefully.[6]

Having formed her special "blood bond" with Victor after feeding on his blood her visible appearance changed, appearing much paler, her hair turning grayish white and showing pronounced canine teeth.

Being summoned to talk with Kareeda regarding her condition he insisted on her sleeping in the Ignis guest-bedroom, not sharing a room with Chipz any longer hoping for her to get better in time. To Chipz however she told him that Kareeda had said that he insisted on having someone escort her around while moving around campus since she doesn't look so well. She of course - had chosen Victor for the task.

She now considers both Chipz and Victor to smell particularly sweet. Questioning Chipz if he had something to tell her, he insisted that he had nothing to say to her, just that he strongly disapproved of her being escorted around by Victor.

After being isolated for about a week away from Victor she appears to have recovered from her "ghouling" situation. As their blood bond was never completely finalized it appears to have been broken. Since then she has regained her pink hair once again.

Invited by Vondanen to his room he confided in her sharing secrets of his past and motivation because of his former friendship with someone else of her kind. During a later session of truth or dare she told her fellow students that Von is her favorite teacher.[7]

WIKI: Please assist in adding the remaining events of the first year! 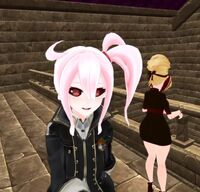 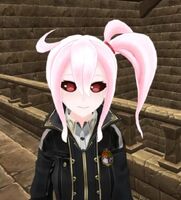 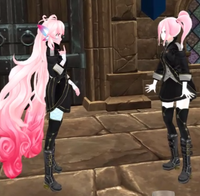 Vevina getting to know Cari. 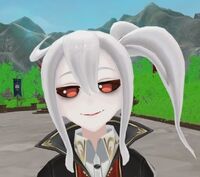 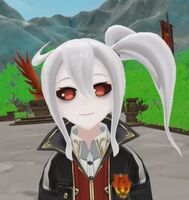 Vevina by the Waterfall, Year 2. 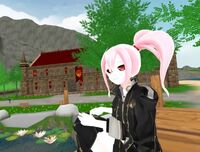 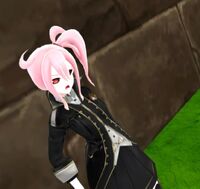 Sharing her concerns about her people and how humans see them.

In the infirmary after not feeling good.

Expelling her venom in Chipz arm.

Gratitude from her kingdom delivered in the form of Royal Honey

Back in the infirmary again 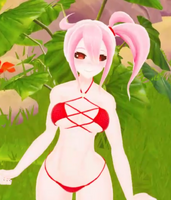 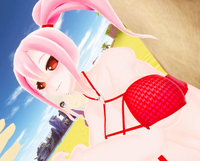 Closer look at the swimsuit design

Revealing her form to Rook and Ryder

Kuroi and Jixie are infatuated by her spider form. 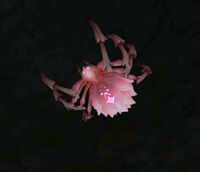 Vev in spider form, exploring from the cave ceiling

Exploring a cave in her spider form 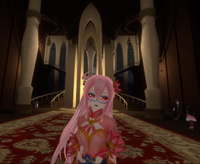 Vev at the ball

Vev with Stark and Rex

Vev after the fight with Speca

Vev and Speca in the desert outpost 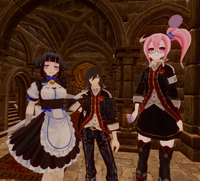 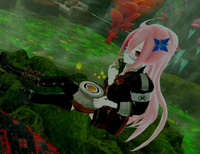 Vev relaxing in her room with Chipz, with her hair down.

Vev in her pajamas with Chipz outside

Vev in the relaxing room

Vev and Stark in Lnik room

Vev and Stark in the Aldoria Camp

Vevina with demon mutation in her eye

Vev getting hypnotized by Chipz 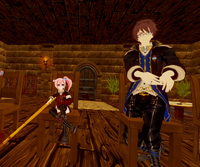 Vevina being cautious from Timmy

Vevina, Speca and Misty on the Timmy summoning 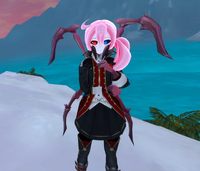 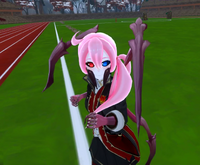 Vevina and Flora on Camp Cari

Vev and Flora peeking at the Gallant squad dorm 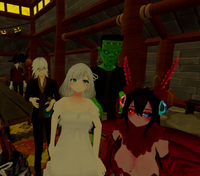 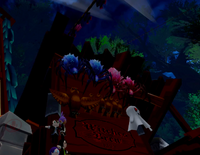 Spider Vev in the dungeon 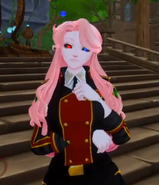 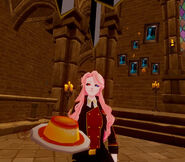