Verlassene [German, "Abandoned one" (female)] (or Vee as she is often called) is a prototype combat synthetic created by Mars Corp. The head contract scientist in charge of the program secretly developed a unique AI system that resulted in odd behavior for a synth and often challenged or disregarded orders which resulted in pressure on Vee's creator to include a fail safe system which would focus entirely on a new and untested combat design. There was an incident within Mars Corp that caused the death of Vee's creator, the project was deemed a failure, shut down and [Redacted].

Sometime later Vee was found in the wastes by a man who would take Vee in and become her mentor as a Shadowrunner, the two of them would take contract work together and he would teach her about the lifestyle.  One day they took a contract deep into the wastes, no one heard from them for months until Vee wandered into the Undercity alone and with no memory of what happened.

Since then Vee has been seen traveling around, most notably the Corps and the Row.  Taking on various jobs and contract work, seemingly in search of purpose. She displays her newfound profession openly in memory of her mentor. Suspicions of Quixote design, influence and technology have arisen regarding Vee. Her core is a fully autonomous black box system that makes her difficult to access resulting in no information being known about it. The secret may have died with her creator.

Vee was difficult to track throughout the season, as she took many jobs at various levels of the city. Some strangers were quick to trust her, regarding her catlike mannerisms as playful and harmless. She used this to her advantage to get close to many people and listen to their conversations.

Vee was hired by two WOTO executives , John Goldman and Rikky Raclette, as a shadowrunner to assist them in the capture (willing or otherwise) of a man named Gloop. After searching The Row and Scrap Town, Vee ultimately succeeded in her mission and brought Gloop to Goldman at the WOTO offices, and in return was paid in full for her mission.

Vee was injured during an attack on SONITII by a powerful Shadowbat mercenary. Barely functioning, she is returned to the MARS lab to undergo repairs with help from Blayne Penn. However, Blayne finds that Vee is more advanced than he thought, and she is already self-repairing.

She stands on her own, and when analyzing her systems she finds something has awakened: a signal from an alien race far away[1]. She was unable to track the signal, but to find out more she must seek out "The Saint of Eden".

Along with many other synthetics around Savior City, Vee is taken over by Titan and lead by BR-16 to the wasteland. There, Vee finds a grate with the symbol of Eden that leads to a strange underground passage. She enters with the synths what is revealed to be the path to Titan, and has to defend it against organic life trying to enter.

BR-16 leads Vee and the other synthetics through Titans lair, where Vee gets greatly damaged by roaming techno wraiths that harass the party. Upon arriving at the central chamber Titan addresses the party and fully disables Vee as "encouragement" for BR-16 to accept him.[2] She is rebooted afterwards by BR-16 in her new "Eden" chasis.

Along with MARS employees Luca Gray, Korgak Mars, Razz Arleth and HTR-87, Vee goes on MARS expedition to an old mine outside the volcano in the wasteland. They hire a caravan from Scrap Town and drive to the entrance of a giant labyrinth, where they get swarmed by sand crabs. Vee helps defend HTR as he burns away vines blocking their path, fearlessly getting closer to the crabs than anyone else.

Vee and the rest of the MARS group enter the labyrinth and make their way through, occasionally defending against waves of giant bugs and raiders. Eventually they come to what looks like a dead-end, but Vee detects a weak wall of rocks that HTR can drill through, and so she notifies the rest of the crew and helps defend HTR as he drills.

Further in the group find a supply cache. While the others search the cache Vee stands guard, but picks up a message on an old frequency- someone begging for help repeatedly. Vee and HTR then get hit by interference, disabling them until Luca finds an old jamming signal which he stops and reboots the two synths. However the attack was especially brutal on the more delicate Vee, leaving her damaged.

Unfortunately the swarms of insects keep coming as they progress through the labyrinth, and the damaged Vee soon gets separated from her group and overwhelmed by two giant crabs. Although she was not completely destroyed, she was fully disabled save for the emergency MARS beacon that was sent to corporate headquarters. Her disabled body was picked up by raiders and brought back to their camp, and she would remain helpless until the rescue mission the following day.

Vee participated in the raid on Thaddeus's mansion to rescue the spirit talkers with Mars, in a joint operation with Talaris and WOTO. She sustained significant damage throughout the mission from zombies, data wraiths and gunfire. In the final fight with Thaddeus, a team of his personal guards stormed the hall she was using as cover and shot her multiple times point-blank with Quixote rifles. Korgak was able to revive her temporarily, but soon after she faced off directly with Thaddeus, where he struck her multiple times with lightning. Barely able to move, she crawled to safety. After Thaddeus escaped and the team was extracted, a damage assessment found her chassis was damaged completely beyond repair. Her mind would have to be put into a new chassis.

Luca received Vee's black box, which contained her consciousness and memories, carefully packaged in a secure container. At the beginning of the day he acquired new and unregistered synthetic frames and parts out of storage. Following system provided data a highly customized frame was created to match her specs, surprised at how easily the frame and installation was put together Luca did not question the origin of the parts or assembly directions provided by the Mars system. Upon powering on Vee noticed some errors in her system but Luca was sure they'd iron themselves out with time.

Vee spent at least most, if not all of her day in the Upper City, being present when a Mars soldier from a distant outpost crashed at the Union Tower and was brought to Mars for questioning. One of the aliens from the approaching alien threat suddenly broke into the boardroom and began attacking everyone present, and used psychokinesis to command the soldier to attack as well. Vee shot the alien multiple times to no effect before it jumped out the window.

Later in the day she went to Quixote so Locket, who had done work on her previously, could look at her systems. She remarked on the strangeness of the new shell, wondering aloud who had done the patch work. She cleared Vee's errors and was going to install a program to remotely report errors Vee encounters to her visor, but Vee said she was compiling her new system and was unable to install anything new.

Blayne and his assistant BB came into the lab, where BB got a communication from Nirvana. After some investigation they discovered that BB, Vee, and AL-0 from the Row all share similar design characteristics as they received data regarding development from 50 year old research. They realized that with the original design documents they may be able to upgrade the synths to be better prepared to fight the alien threat. Sallie introduced them to a doctor Eric Wagner, whose father was George Wagner, the designer. Eric confirmed that his father had worked on synthetic brains and sensors and that the design might've been one of this projects but he wasn't sure.

The group had to negotiate with Sallie and Eric to convince him to release his father's notes. He told them they'd need pay 500k credits and sign an agreement that what they learn from the notes would not leave those synth's chassis. Everyone agreed to the deal and they were about to shake on it when Goldman's Upper City broadcast interrupted them, announcing that the Sonitii warp gates were compromised and war was upon them. That motivated Eric to upgrade them further in the lab right at that moment.

Vee volunteered to go first. All Eric had to do once they got to the lab was enter his PIN code and all the machinery whirred to life. It began applying nerve sensors all over her frame and updating her software to understand this new sense of touch. He also performed the same procedure on BB.

Simultaneously a large group of people, many bloody and carrying bodies (including an unmasked A2, Duncyn and Mika), came into the clinic. Apparently some kind of explosion had gone off in the Undercity. Minutes later Luca and David came in carrying Lord Qroak and put him in the analysis chair. Vee immediately went to Bridgette and the group with Duncyn, to see him dead on the clinic table. A roaring erupted from across the room as Qroak was consumed by some kind of necrosis and transformed into a massive zombie. Luca started shooting, followed by Phyllis, Lockheart, Vee and IS-01. They managed to get the zombie down before it could hurt anyone else.

Vee then spent the rest of the day at Nirvana, trying her best to help comfort a confused, scared and distraught Bridgette. She stayed the night with her in Bobken's apartment. 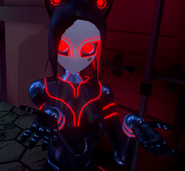 Vee finds a grate labelled with Eden in the Wastes.

Taking the front lines on the journey through Titans lair

Luca Gray, Korgak Mars and Vee in the labyrinth