Veinhelm is a currently a roleplayer on VRChat. Originally started playing VRChat back in December 2017 when there was a surge of new players joining the game, he joined in on desktop at first when he discovered the game.

Shortly after playing the game, for about two weeks after, he decided to upgrade his set up and buy a Vive headset and three trackers. When he first started integrating into the community, he was discovered by Sp00nerism who met him a Great Pug when he was doing a hyperventilating joke when sprinting as a Solid Snake model that ran in a crab-like walking animation. Through Sp00nerism he met VII and Kremit, who were streaming VRChat at the time. A month after playing, his computer's insides fried, rendering him with no means of playing VRChat, resulting in him being gone for about two weeks after ordering a new PC. Spending a lot of time with Kremit, he met Expansion. Who at the time, was using a lot of soundboard effects and humorous sound clips. With Veinhelm's full body comedy and Expansion's soundboard, they made a great effort making a lot of lobbies fill with laughter. Veinhelm eventually decided to make a VRChat official account so he could commission an avatar to call his own. He met a creator named Nave, who was amazing at doing shader and particle effects, arguably one of the best at that current time. Veinhelm commissioned a Lich King avatar that could cover people in ice as well as darken the world and change the skybox into a moon with clouds, following after would be able to summon a sword made of ice that would break from the ice to reveal frostmourne. He would show a lot of people this avatar and eventually was given audience to pokelawls, woops, drekwiz, and others at the time who were in Team Five. After this, Expansion and Veinhelm would be participating in Shownights Talent Show which was at the time hosted by Matu. One of their first performances was Veinhelm showing his Lich King's animations and at the end would be followed up by Expansion playing A-ha's Take on me, leading Veinhelm to doing the dance of the A-ha Take on Me dance created by ThePruld. Some performances after that, Veinhelm commissioned a Black Panther avatar from Nave for better talent show performances. A long while after doing weeks of Talent Shows on the weekends, Veinhelm and Expansion eventually were put on the Shownights map's Hall of Fame, forever immortalized for the comedians they were. Expansion had gotten full body and did various performances with Veinhelm, being a dynamic improv comedy duo. They never planned any of their performances beyond the song choices, making their performances almost entirely improv. Nave was once again commissioned by Veinhelm for an avatar, but this time it was something different than a Lich King or Black Panther. This model was to be Veinhelm's first of many horror avatars. This avatar was using a model from Call of Duty: Ghosts, called 'Maniac Juggernaut'. It was equipped with a knife that had a particle attached to it, that if it struck someone, a local shader would envelop their screen, make it blurry and would make it look like they fell over by lifting the screen up and fading the black. At the time it was very, very rare for anyone to be using particle collision of such design. It was also able to shake the screen with an aura effect, that if anyone was nearby, their screen would be darker, shaking, and the skybox would be darker the closer they were to him, his eyes would also light up red. Another avatar some time after was commissioned from Nave as well, using a model from the same game, called 'Assault Juggernaut'. This avatar had the same aura effect with the red eyes, however, it was cable of a different kind of particle with shader effect. When colliding with someone, the particle would trigger a local shader that would cover up someone's left eye in their VR headset, replaced with a camera that came from the eyeball that would be held in his hand, simulating he stole their eye. 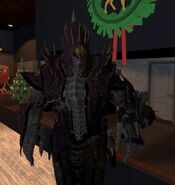 Spotted at a Black Cat lobby run by Roflgator.
Add a photo to this gallery
Retrieved from "https://vrchat-legends.fandom.com/wiki/Veinhelm?oldid=62669"
Community content is available under CC-BY-SA unless otherwise noted.