Vanto Ruve was a siphan municipal worker employed by the Galactic Union to handle waste management and maintain industrial systems in the Undercity. He gathered garbage, tended and watched over the trash collected to burn in the incinerators when there are no other pressing matters.

Quixote had originally hired him to test out new prototype drones, but he has since been released due to workplace conflict.

Vanto had been planting bombs, rigging many grenades together all over "The Death Flag" tavern, intending to kill its owner, the pirate captain William Vossler. Located in The Undercity water district the captain and his daughter Angelina make up "the Greasepalms" family. After seeing multiple enemies of his enter the tavern all at once Vanto saw his moment and decided to detonate the bombs remotely. From his shop across the street he saw A2, the leader of the gang known as "Cell" from The Row, as well as Quixote Corporation aligned.

In the blast Duncyn was killed and Mika completely destroyed. Angelina and William were injured while IS-01 and BR-16 damaged.

Going out with a bang

After getting treated at medical and witnessing Duncyn die in front of her, A2 returns to the docks in a rage and seeing Vanto hovering around the scene of the crime she confronts him. After questioning him she quickly accuses him of being guilty of the bombing. The wounded Greasepalms and more Quixote guards arrive. Shortly after the accusation A2 shoots Vanto, not liking his nonchalant responses and fires at him once more. Tiring of him for good Kraver tells everyone to kill him and they all start gunning him down in a public execution without any due process.

As if to add sugar on top of the dynamite cake - when Vanto died, a dead man's switch was triggered. As Vanto's heart stops another 10 pounds of C4 on his person detonates. This time the additional explosives devastate the gathering that amassed around the spectacle, sending a shockwave followed by shrapnel in all directions.

In the surroundings Samuel is fatally injured and later passes away while getting medical treatment at the clinic. A Quixote guard, Phil, Hadwyn and Mercury are all injured with Lucio getting his wings blown off by shrapnel. Further away Levi and Polka suffer minor wounds. 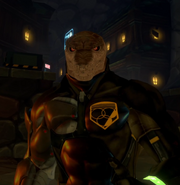 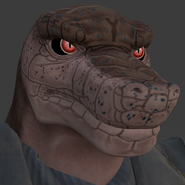 Held up by A2 and Greasepalms