Hi, I'm known in the community as Lamango, but my IRL name is actually Ryan. I'm 32 years old from the New England area of the USA.

If you want to read about the fictional Lamango, go right ahead, he's below this little blurb. This is just something to tell you about me and why I do this.

Before VRChat, hell, before even the internet, I loved writing and drawing little scenarios. I suffer from depression, ADHD, and anxiety attacks, so doing that kinda stuff helped calm some of the nerves.

Some people see me in chats being 'aggressive' and 'moody', but I'm actually just being a shit poster. I'm sure many people who are featured on this wiki can attest to me 'being a softy' at heart. My sense of humor branches from multiple things, from Jim Henson's the Muppet Show, 80's Wrestling, Mystery Science Theater 3000, Beavis and Butthead, Whose Line is it anyways and a slew of other things. By 2008, I found the Vinesauce community, my first internet home, and then by 2010, I found the newLegacyInc community.

My favorite story to tell though, is before VRChat got as big as it is now, before it was even an outlet for people to RP in, back in late 2017, when only three people streamed it regularly. I was a regular in Captain Sea's chat as he went around VRChat exploring. One night, Nagzz happened to be in the chat, and I consider Nagzz my closest, oldest friend in this community as of now. It helps that we're both pushing thirty, from New England and share a similar sense of humor.

As the community grew, Nagzz made videos, more and more people started to play VRChat, and soon, it got to the level of where it is today. But me, being unable to do things to like, donate, subscribe or even gift things to people, felt like I couldn't do anything to return the favor of what VRC has done for me. So in a sense, this Wiki is my way of repaying the endless amounts of laughter, love and warmth this community has given to me.

I wanna thank Nagzz, Lanfear, Egg,  Oathmeal, Duracity, Stealth, KimplE, Zentreya, Saranavii, Shiro, Kirbynite, Oogiesgirl, Kuri, Ashunera, Lucky, Mocha, Foxe, Summarill, Rebel, Minerva and everyone, for even accepting me into this community and hell, even accepting my friend request on Discords. There's over 100 of you that I consider my buddies, and if you ever need anything, I'm here to listen, give a second opinion from a different view point if need be.

As of 2022, I've taken a big step back from editing, but will still pop up time to time. Life is hectic right now so it's easy to lose track of things.

Brother (turned corrupted and tries to kill him.)

Children (Lamango has adopted three children over the course of years)

Greenish Gold
"It usually takes a monster to beat a monster."

Born in a fishing village on the coast of Hanabi, Japan, Haru Nakajima(Lamango's original name) helped his father since age five (mending torn nets, helping unload catches). By age fourteen, he was contacted by a mad woman claiming to be a scientist. She 'recruited' (kidnapped) him into being the first volunteer for her plans on mass producing living weapons.

Obviously, scared, and now, genetically manipulated, Haru escaped. Diving into the ocean and hiding out (able to breath under water due to the gene-manipulation.)

Dubbing himself dead by 1954 and renaming himself as 'Kaijura', he now appeared yearly, watching his parents live on (Until the Mad Woman took control of his mind and forced him to attack his own village, killing his family and his then girlfriend, Mizuno.). He also met a fellow victim from the mad woman, named Kojikawa Kobayashi. Kojikawa and Kaijura fought for a while, until the mind of Kobayashi was cleared by a powerful upper cut from Kaijura, freeing him of the woman's control.

Kobayashi has since been Kaijura's friend ever since, being ever loyal and usually with in an arms reach away from the man who freed him.

It became apparent that more and more people were turned into living weapons, some being happy with it, such as Tomoyuki Tanaka, who gleefully slaughtered anyone in his way. The two fought, and with Kojikawa and a new alley named Shigeru Kawamura, they made Tanaka retreat.

Through the years, Kaijura made many friends and enemies, and after his second adopted child renamed him 'Lamango' he took on the name fully. He then discovered, by 1993, humans hated them for how strong and different they were, and made it a mission to bring his newfound friends and family to a deserted island where they lived with a few humans who followed.

Living in peace on the island was well and good, but the fact they had to scare off suspicious boats from the coast got taxing. By 1995, Lamango found an ancient relic, a functioning space ship at the bottom of the central lake of the island. By 1999, it was up and running, named Garumada, and Lamango and his friends left the Earth for a more peaceful existance.

However, having an unlicensed space ship full of 'freaks', word gets around and soon, he was labeled a 'space pirate'. He was anything but, as he found a planet, unnamed and uncultured, renaming it 'Odo' and moving there.

The crew and Lamango spend most of their days traveling to neighboring galaxies to remove 'problem creatures' and relocating them to Planet Odo, until 2017, when his body started to disagree with him, and he longed to return to Earth.

As of now, Lamango's slowly approaching Earth to see how it changed, and was quite shocked to see a mansion floating by Saturn's Rings.

Involvement in the Crossover:

Though not actively taking part, Lamango has made a few appearances. It's speculated that the ship that sometimes flies over Club Rogue is Lamango, observing from the distance. Also, his tech genius, Nezu, seemed to have 'hacked' a number of of the cameras the people on VRChat world uses and relays the information to Lamango.

Sadly, Lamango's sister ship, Shockirus, was attacked by Tomoyuki Tanaka on his way back to Earth. With a single tackle, the ship was destroyed, sending Lamango and several of his crew mates crashing down all around VRChat. Injured, Lamango took to the ocean, swimming to a deserted island where he has little contact with people. It is unknown if he's currently in primal mode as a survival method.

Lamango recently was seen living near an ocean port of a city, running a shop/bar. It's also rumor'd he's one of the creative minds behind the mysterious Inner Tube TV in the back of an electronics shop.

Lamango also acts as the 'manager' of three bands put together for Inner Tube TV and almost always is in the recording booth listening to them.

Lamango isn't one to use powers. He has a few, but he prefers to get close and personal when fighting. Ever since his bio-remake, he's gained a few trademark powers:

This is a state that Lamango isn't even aware that exists. It's usually reached when he is at his limit, on the verge of death. It was compared to Hulk Hogan's Hulking Out by Kojikawa. Tell tale signs of this form are when Lamango gains a more hunched over look, starts clacking his teeth together, his two incisors grow into almost fangs, his nails elongating into claws, and his eyes blank out. A record of this was found in the Mad Woman's original lab:

"When entering the 'Primal', Test Subject 01 becomes at least twice as strong, resistant to pain, and more set on killing. It was noted that he disemboweled my Prometheus in one swipe of his claw. He does not communicate well in this form, either silently starring or releasing a very low pitched hum from his throat. It also should be noted his regeneration during this time either becomes slow, to the point of stopping, or overclocks itself.

His fight with my Ginka was more gruesome, as he actively bit down on my security's neck, slowly dragging him into the waters. Slowly, one by one, renders of flesh of Ginka came to the surface. He also reached this form when Test 'Shikkon' was created and targeted his 'child'. Another one he fought in this form was Hira-Jin, a cyborg I created to abduct future subjects. It is unknown what triggered his Primal at this time, as he just suddenly exploded out of a building and tore my cute little cyborg to pieces as it screamed. He spoke his only full sentence in this encounter while Primal. 'True Ruler of Earth'."

Lamango has NO memories of these incidents, and his friends don't talk about it. It's assumed he has attacked all of them at least once when in this form, as Kojikawa has teeth marks on his neck from 1955 that strangely fit Lamango's bite pattern.

The Primal has actually spread, being present in Kojikawa, Shigeru, and several other of Lamango's friends. Reports of an eerie blue glow appearing at the sides of Lamango's mouth have been noted when he reaches this state. Kojikawa had this to say:

"I never seen my brother like this. I hate it. Especially when he starts responding to voices we can't even hear."

Since he's usually front and center with battling, usually hand to hand, many weaknesses were found out.

Electricity. It depends on the voltage, but usually, it can make Lamango slow down and reconsider things, to falling on the floor, smoke coming from his mouth.

Mind control. The Mad Woman found out Lamango, and most of his close friends, are easy to manipulate due to their more primitive minds.

Cold. It's suspected the M.W. injected Lamango with reptile DNA at some point. He can usually found basking on sun-heated rocks, in hotsprings, or even on top of his space ship. It has been witnessed that the cold temperatures can send him into an almost daze, to full on hibernation until the weather clears.

Alternatively, he is also able to become over heated, and tell tale signs of this are when steam actually drifts off his body.

Slowness. Being 7 feet tall and possibly over 300 lbs means Lamango's not as agile as he thinks he is, and this can be used against him.

Like any old brawler, Lamango suffered some serious injuries, usually from protecting others from the wrath of his own enemies, these include: 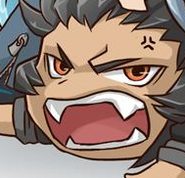 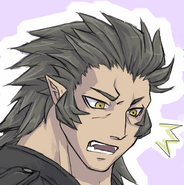