In love with a Neko.

Much of Tyriss and her past remains a mystery, whether this is due to her secretive nature or simply a loss of memory due to some unknown trauma could only be answered by her.  She first appeared in vrchat frequenting the great pug where she met Roflgator, LeyLey, Drekwiz and many others, she was then seen traveling around with various people exploring, meeting new people and seeing the various worlds of vrchat.

It's rumored that Tyriss may actually be a Kitsune or some variation of one as she has been seen often changing forms into a white haired fox girl who is playful and silly in nature and almost innocent compared to when she is in her human form where she can be reserved, calculating and cautious.

She has demonstrated her skill at tactical games and possesses deep comprehensive abilities, which can often lead her to miss some of the more straightforward things in life as it appears she is always trying to find deeper meaning in what she comes across.

Recently she has been seen frequently visiting Neko Nights and the party scene. Going on adventures with Lanfear and Oathmeal, taking on new challenges and making new friends. 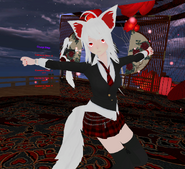