Hailing from the side of the city that most resembles Neo Tokyo, Tynan was born as a rare form of oni from his clan. Having no pigment in his skin, he was destined to commune with the spirits and obtain great honor among the Oni. His clan, having a major presence in this section of the city, runs things almost like a yakuza. They taught him to fight and hold himself alongside his lessons of his elders about the spirits. While taking a vacation to an onsen in the city, someone broke into the changing room and stole his sacred ceremonial beads. Making the mistake of leaving them there and having them stolen, he was deemed dishonorable within his clan and was cast aside. His training cut short and, with only partial knowledge of his own people, he set out to find his stolen heirloom. Taking odd jobs around the city ranging from simple deliveries to refreshment serving, Tynan came upon a more paying job, bounty hunting. Needing new equipment to replace what he had to leave behind, he contacted a close uncle within the Shometsu Corporation in the hope he would look favorably upon his nephew. His uncle, knowing of Tynan’s struggles, gave him basic weaponry and armor to give him at least a running start on his journey in exchange for his service when called upon. Having a slow start, he made his way up the ranks, eventually becoming a freelance samurai. With his savings he journeyed to his latest lead to a location in The Row. Here his journey began with a tea shop and an acquired apartment in the Undercity. Now it’s just a waiting game, gathering information and waiting for his opportunity to strike.

And So It Begins

As Tynan was cleaning up, unpacking, and taking inventory of his Tea shop in the Row, he heard a commotion from outside. As he takes a look, Tynan discovers the homeless that live near his shop. Being early in the day, no customers were showing up. Noticing that, he decides that it is a perfect opportunity for him to do some errands. Closing up shop, Tynan heads towards the medical clinic to submit his medical files. Walking out of the clinic back to his shop, Tynan encounters two of the row’s troublemakers: a suit of armor and a small synthetic called Gu1d3-B0t (Guide Bot). Shenanigans soon ensue with the two row residents. Tynan becoming overwhelmed with their weirdness and decides he should finish some more errands in the undercity. As he was leaving, he noticed that the Fungi Noodle shop was open and stops for a meal before heading out.

After the boat ride from the Row to the Undercity, Tynan enters a Restaurant called the Death Flag along the pier. The owner is Cpt. William Vossler, a space pirate living in the undercity. After some brief introductions, Tynan asked the Captain if he heard any mention of ceremonial beads, necklace and bracelet to let Tynan know as there is a bounty of 50,000 credit bounty. When hearing about the bounty, Vossler was very excited to help Tynan out.

Having a straight shot to his house from the Death Flag, He checks on his house and visits the hot springs. Finding everything in order and nothing vandalized. He decides to wander the Undercity. Entering the Fire District, He bumped into Alexander in the Wildfire Diner. Alexander has been told by Kythus that Tynan would know where the elemental crystals can be found. Tynan explains that during his exploration of the undercity looking for shrines, he had found some crystal deposits near the locations of the shrines.

At the mention of the name Kythus, Tynan decides it is a good idea to look for him. On his search, he bumps into the medical doctor of the Undercity. The doctor introduced himself as Dr. Rowan. After the brief introductions Tynan submitted his medical data to the Undercity clinic. As they said their goodbyes Tynan walked through the sewers finding the Sanctum. The Sanctum has a huge magic circle in the entrance and Tynan believes it to be a good place to meditate. After his meditation his spiritual connection to the spirit plane begins to strengthen. Tynan began to feel the uneasiness of the spirits in certain sections of the Undercity.

Realizing that Kythus isn’t in the Sanctum Tynan continues his search. As he walks into the Water district of the Undercity he bumped into Eros and Ikelos talking. When they have a brief pause of the conversation Tynan asks the pair if they have seen Kythus. They promptly answered that they had not seen Kythus. As if out of nowhere Kythus finds them and asks them if they had any business with him to follow him. He was being led to the Grove by Leilani. Promising Tynan that they could have a chat in the Grove.

As they arrive at the Grove, they were given a tour by Leilani and learn how naturally attuned the Grove is. Kythus, with Leilani’s permission, takes Tynan to a “crack in the wall” showing him the shrine in the Grove hidden from the public populace. When they approach the shrine Tynan is told that he can show off his magic so Kythus can have a better understanding. As Tynan meditates, his spirit magic manifests around him like a shroud over his body. Kythus, satisfied, tells Tynan the locations of all the shrines available in the Undercity. Tynan grows concerned as all the districts seem to have a shrine, but one. That district seems to have the most agitated spirits. Kythus shares Tynan’s concern but having finished their business in the Grove, Kythus heads toward the Sanctum.

Tynan loosely follows him to the Sanctum. When arriving at the Sanctum, Tynan decided to meditate once more in front of the Sanctum in the magic circle. As he meditates he meets the teacher of the Sanctum named Ciara. He feels unease from her. Through conversation with Shaska, another doctor in the Undercity, he learns that Ciara will be teaching magic the next day. Curious about how people in the Undercity learn and practice magic he shows some interest. Tynan talks about how in his clan they teach magic the same way chakra is defined. Moving mana through the body to deal with ailments of the body, strengthen the body, or manipulate the mana for external use.

Having nothing else to do, Tynan wanders the Undercity again. He finds himself in the Air district where he re-acquaints himself with Raleigh. Raleigh having a part time job in the Sanctum leads him back to the sanctum where they talk in the library about past events in the Row and differences in the teachings of magic between the Undercity and his clan. After his chat with Raleigh, Tynan walks out of the Sanctum to meditate one last time.

Alexander, curious about his magic, asks what Tynan can do. Tynan explains that he can concentrate and contact spirits but that he isn’t a medium. Being so late in the day, Tynan decided to wander the Undercity and make his rounds for the last time in the end day to see if anything new had happened. He takes a trip to the Vossler’s tavern asking for Sake but getting vodka instead. He approaches Vossler with the idea of importing Sake for him and that money was no issue. After leaving the establishment, Xia caught up to Tynan letting him know that his “special” dice had come in and were ready for pickup at her shop. Continuing with his wandering, Tynan arrives at a liquor stand. The stand is owned by Ahi, another spirit talker who offers a drink to Tynan. He accepts her offer and buys a drink. For his final errand of the day, Tynan checks on the hot springs one last time before leaving to receive his dice set. The hot springs were in order and he even bumped into Conk and Bo who were leaving. They were pleased with their soak and reassure Tynan that the place was clean as they were leaving. Satisfied he leaves for the Row and receive his dice and returns home for the night.

*Through his wandering he met A.Greasepalms, Mika, Minto, Quinn, Anthony, and Isaiah.*

When Tynan was being trained by his clan he befriended a fox spirit.
Tynan enjoys sake, enough to take a morning swig from time to time. 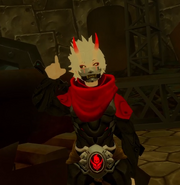 Tynan exploring The Spirit Realm with Sheila, Ahi and Reeza 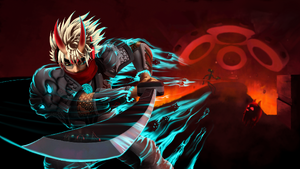