Ty was once a happy go lucky Kaizon living day to day as normal until The Union attacked her home and took over her planet of Pthaantal. Forcing the occupants to mine for supplies to help with the war. Many of her family died during the war years but she kept pushing on.

Years after the war Ty left her home on Pthaantal using the ship her and her Grandpap made together. With her grandpap passing away shortly before they were to depart she made it her task to carry on and finish her Grandpap's project. Her wish is to make him proud of her and to learn what new things await her on the next planet she reaches.

After crashlanding on planet Hellion she was picked up by Scrap Town locals. Hearing the loud bang as her ship entered the atmosphere from orbit they followed the resulting smoke it left behind. Intending to salvage not much of value remained after the crash but finding her instead they brought her back to the settlement. Meeting the locals and lacking any new destination she decided to settle down and find work as a Tailor. 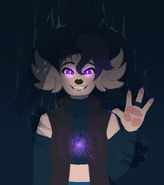