Trixie Lockheart is an adept fighter with a knack for tinkering with dangerous tech. She values giving it her all in everything she does. Whether its her top-notch martial arts skills in taking down her opponents by ANY means necessary. Or her top tier intellect that she utilizes to the fullest when developing and tinkering with weapon tech. Her crown achievement is her gloves that she developed herself that come complete with kinetic energy that amplifies her punches three-fold. And a hardlight shield that can be projected a few inches from her glove.

Scorned by her father's unyielding unacceptance and the loss of her mother at an earlier age, she has a cold heart and little patience for things that don't go her way. She will do what it takes to get what she wants no matter the cost. 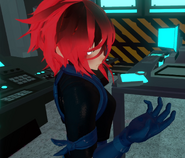