Torok is a giant muscular tortoise, hailing from another world that he fails to remember, that has long since forgotten anything of his past and desires. Having more recently left a (murderous) circus troupe, Torok wanders in search for a place to live, food to eat and a copious amount of drugs to take.

His size is usually an issue for him but he makes do as he blissfully strolls through life with a smile on his make-up covered face. Wandering from place to place in search of a job he can do without issue.

Hired to work at the Scrap Town smithy for Sten, he smelts ingots and flattens out scrap metal when he isn't snacking on parts. Consuming metals doesn't seem to hurt him and they do come out from the other end of him eventually. So far he's completed a weapon for War-Togg and a new shield for Sir Polka.

Rarely remembering names he tends to only call people by the nicknames he makes up himself.

From his long years of living he has seen many terrible things and learned much but forgotten most. Although having a broken memory he is occasionally struck by moments of clarity, speaking small snippets of wisdom or recalling experiences from the past. In his own words his reason for taking drugs all the time is to not have to remember.

Sharing a complicated past with Zes, she acts a bit like his unwilling guardian. Keeping the absent minded Tortoise from getting tricked or scammed out of everything he owns and calm enough not to start any unnecessary fights.

Plonked down outside of the Scrap Town clinic, looking for drugs

Torok and War-Togg in the smithy with Sten

Working at the forge in the smithy 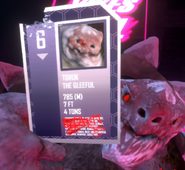 Torok's ID. The jobs he scribbled over, in his own words, are jobs he's apparently had since coming to "human places." 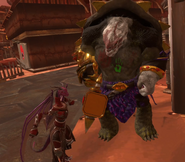 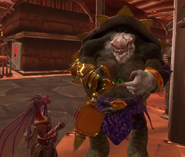 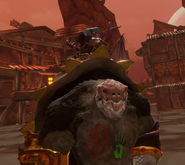 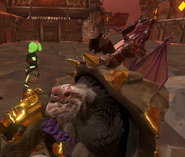 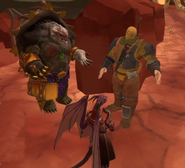