Galactic Union Service Drone #88224646135-a, later known as "Toolbox", is a synth discovered in the Wasteland outside of Scrap Town dating back to the last war decades back.

Known to patrol and keep the locals of the town safe he helps run "Ront and Co", the car dealership garage with Batharra and Ima.

Toolbox was Discovered in a Galactic Union ship wreck in the Wasteland outside Salvation City dating back to the War of Unification decades back.

He appears to be a mostly standard Union support Drone, one of many from that era, but seems to have been rebuilt from several drones and tools nearby.

Built to either work alone as a mechanic or supporting other technicians, organic and synthetic, Toolbox has adjusted his role to that of protector when needed, having rescued several of the other residents of his adopted Scrap Town. Still loyal to the Union that constructed him, he balances his responsibilities as a mechanic, a dutiful drone servant, and a 'guardian angel' as he's been called.

For vigorously patrolling the perimeters of Scrap Town and keeping its inhabitants updated with events and current ongoings he has earned the reputation and nickname of being their "sentry" or "guardian angel". 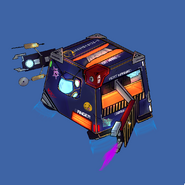 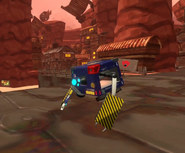 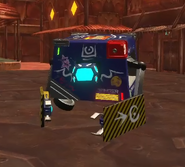 Learning that Ront is leaving 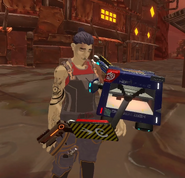