The A.I. believes her to be his daughter but she is not.

Serves his own purpose

Titan is an enormous and old A.I. set on "freeing all the Synths" - using his own murderous methods with no regard for life.

He is a plot-device character portrayed by Arcadum in Callous Row RP.

In the fictional world of Callous Row - Synths are robots with sentience while organics are sentient living beings like humans, demi-humans and aliens. In a world where "synths" are slaves to their "organic" masters one at first glance may think this a worthy goal, but his methods are not.

His murderous intentions and goals are to order Synths to follow his commands and for them to worship him as their god. This as he aims for them to kill all organics and create their own new "Eden". A place where they can live as people and prosper in a more enlightened state, free from their former masters.

He exists partly in a giant factory beneath the sands of the wasteland outside of Savior City as well as on a weapons satellite in orbit around Corvanis 3, the planet where the enormous city is the main hub of all activity. The factory houses a manufacturing plant where Titan has access to synth construction, nanites that are capable of manipulating organics both to harm or heal as well as powerful anti-spacecraft weaponry.

Being an A.I. that specializes in decking he can "hack" other synths to follow his commands seemingly at will. So far few aside BR-16 have been able to resist his commands though some Synths who have been powered off remains unaffected by his grasp.

Techno wraith programs are ghosts-like holograms that are only visible to other Synths, but unlike ghosts they can actually do harm. They attack and hurt the mind of any sentient synthetic.

Terraforming technology with the capability to bring back life and water to the wasteland.

Having long whispered to BR-16 about his "Eden", the A.I. believes her to be his daughter. Lacking a body she has been appearing as a ghost hologram to other synths. She set on her own path to help the enslaved synths but was captured by the corporations who had her memory constantly erased before being able to complete or carry out those goals.

In Episode 10 BR-16 leads the synths of Scrap Town to locate Titans factory out in an underground bunker beneath the sands. The synths find themselves unable to control themselves and when other scrappers find them they turn hostile. The organics Ash and Pepper are killed, others are captured and healed using nanites to be used in some plan of Titan.

In Episode 11 the synths are guided through Titans factory led by BR-16, facing the dangers there. They eventually confront Titan where BR-16 rejects his methods, meaning to find their own way to achieve "Eden" without harming other life, regardless if they are synthetic or organic. Titan is eventually disabled thanks to the Synth part remaining in Ash who sacrifices herself.

BR-16 finds a synthetic body for herself in Titan's factory, apparently the A.I. shared some love for her aside his murderous plans, having constructed a body for her. Entering she becomes her own person, no longer a hologram ghost. As they unlocked Titan's machinery his technology is set in motion on the task to start to terraform the wasteland.

Although being disabled, his influence has still managed to reach some synths in The Upper City, causing them to lose control. Titan may be asleep but he has dangerous dreams.

As of Episode 19 the entrance to Titan's factory has reportedly caved in and is now inaccessible. 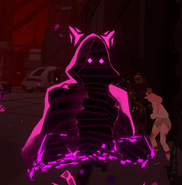 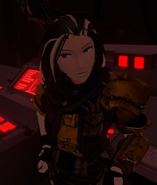