Theris Fueler is a purple Tiefling, he owns "Devils Details" down in the Undercity. He's a technician and a pretty good one to boot, hes affiliated with the Wyverns and believes everyone deserves freedom.[1]

Theris was always interested in the way electronics worked. So much so that whenever he had the chance to take one apart he would. Whether it be a cellphone, computer, or fuse box, he always wanted to understand how it worked.

After finishing high school, Theris went to electrical engineering school. While he was there, he was spotted to help with a project from his professor. “A new power generator capable of powering an entire city,” he was told. It would trump nuclear power plants by a mile, creating affordable and safe energy for all. Theris would help with the project for months to come, working day and night, adding new things and helping with ideas people had, adding his own along the way. However, when it came close to being finished, Theris felt the need to “test it out”. He rigged his school's power system and switched it on. For a minute the generator seemed to work well, and he was proud of all the work he and his other classmates put into it. But the generator failed moments later, shorting out and causing a massive EMP that fried the schools power grid, along with an entire city block.

Theris was kicked out of his engineering school because of this, and he lost his chance to earn his degree, ending up forging one to get by. He found work with a small company of electricians, working on corporate buildings and other building projects. However, once again, during a critical moment when they were setting up a new building's electrical grid, Theris came across some open wires connected to a fuse box. He noticed that the power transfer could use a bit of a touch up and he tried “fixing it”. Once the power for the building was turned on, the entire electrical system took a hit, causing many of its wires to fry. He was fired for ruining a great opportunity for the business and was let go.

He now does his own electrician jobs whenever he’s contacted through his personally made website. His ratings are usually good, but there are a few bad ones here and there.

Exploring the Row/Meeting its denizens

Theris started his first day off in the Row looking for a good place to have breakfast. Unfortunately most places weren't open except the convenient store, he bought himself a sandwich and went on to explore the Row. Taking his time eating and walking Theris finds himself walking into the water filtration area, he set down his tool box and sandwich and got to work. After a minute or two he gave his Co-Worker Vanto Ruve a call to make sure nothing was wrong with the pipes. After some twists and turns the two ran into a problem but quickly solved it and both went on about their day, after finishing with the filtration area Theris went on to find the electrical grid. It took him a couple of run by's before he finally found it, taking his time to make sure all the power in the Row was being given properly Theris noticed a large amount of power was being used a extremely large amount, what was using all of it he couldn't figure out but he decided he would figure that out later as at the time he noticed a fuse box that had been left open that could severely use a fix. After some fine tuning and a bit of a painful shock Theris managed to fix it without much trouble, he picked up his tool box and made his way to the bank to speak with the Mayor.

Coach Eric the Mayor of the Row introduced Theris to some of his other Co-workers Becky Cantuckit was a bit of a odd one to him. She called him Paris and seemed interested in some sort of relationship between Coach Eric and the banks head of security Gregor Loch Brunswick. After sometime doing some light maintenance work around the bank Theris decided it was time to take a bit of a break, he headed home dropped of his tool box and headed back out. Theris walked around jumping into different conversations one happening right in front of the bank. Both of his Co-Workers Becky Cantuckit and Jimmy Young were part of a large discussion about arena fighting. He didn't catch the names of the people looking for fighters and frankly didn't care as they said he seemed like he could fight and Theris had no intention of taking part in any arena fights. After having a few conversations and a failed attempt to head down to the The Undercity Theris happened to walk into Coach Eric with his friend of his named Dagu. Coach asked Dagu to give Theris a bit of a tour of The Row to see all the places Theris would be working and other things he wasn't actually familiar with. Early into the tour Theris met Nash Quentin a man that works with The Wyverns as a instructor of survival skills and combat training. Nash Quentin Offered him a spot with The Wyverns as their own personal maintenance man, Theris told him he would think about it and continued on the tour with dagu. After the tour Theris headed to The Grindstone where he found his boss and his Co-worker Becky having a drink. He joined them, after a bit of talking about what Theris could only assume was Becky's past they left but before leaving Theris asked what all the wiring was for as there seemed to be a lot of it with no clear reason as to why it was there, Coach dismissed it and they went on their way to the bank. After sitting in the bank for a brief moment, Coach had Becky take Theris around to meet some of the people of The Row. Theris gleamed from the two interactions Becky had with a Synth and a brothel worker named Cleo that Becky wasn't very well liked and was probably the reason why she went by Rebecca now. After some harsh words thrown at each other from both Cleo and Becky, Becky decided to pull Theris into the brothel even though he objected to the idea. Becky quickly left leaving Theris in a environment in his own words was "Not my scene", however during his stay there although uncomfortable the owner of The Dirty Diamond Kee’ra Diamond made him a bit more comfortable. After a brief interaction and Coach coming in to have a drink Theris asked if they had anything wasn't working that they needed fixed, Kee'ra pointed out that their microphone had stopped working. Theris offered to take it home and fix it and that they could discus a price when he was finished with it, Kee'ra thanked him and he left to take it home.

After taking a brief moment to figure out what he would need to fix it Theris realized he had ran out of solder and needed to find a place to buy some. Easily enough he ran into Dagu after leaving his place and asked if he had any, luckily Dagu was kind enough to give him some however he was taking it from his boss's business and Theris would have to stay quite about where he got it from. Theris thanked him and went on his way, he found the gesture very kinda of Dagu and it put him in a better light Theris not knowing him very well.

Exploring The Under city

Theris made another attempt to get into the under city with success. giving Vanto Ruve a call so they could meet up and get some work done. Vanto told him to meet at the incinerator, Theris went over to the fire district and down into the incinerator,helped him fix a problem with one of the trash chutes and they went to get some food and chat for a bit. After awhile of drinking,eating, and talking with the locals Theris and Vanto got back to work. Vanto had one place he couldn't really work do to the cold temperatures, Theris had to go into the air filtration area for him to knock the ice of the fans. Once he was done with that Theris noticed that there was a passage way up. [More edits later] 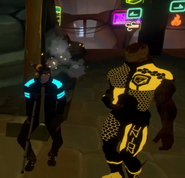