Brown
"The Sheriff" is a homeless vigilante. He claims that he used to be an actual sheriff but appears senile and has since lost his sense of reality. "Similar to typical VRChat players." [sic] according to Roflgator who portrays him.

He lives homeless, bumming places to sleep in the dark alleys of Callous Row, the slum that lies in the shadows of the enormous Savior City. Savior City is a cyberpunk metropolis located on the planet Corvanis 3 in the Corvanis system.

He lives off garbage and whatever he can get from the local places that he claims to "protect".

Roflgator only participated in the first week of the roleplay and have yet to return.

Originally coming from a town on earth named Bricktown he one day encountered a dark portal when chasing and following after a villain who went through before him. He refers to the portal as "The VOID". When he arrived in Callous Row he had no money and nobody believed his story and this eventually drove him mad.

He greeted new people in Callous Row and offered mercenary work to Jack Montagne and Rook and nearly urinated in public locations, being unable to find any bathrooms. He also expressed his distaste towards Robots blaming them for "stealing all jobs."[1] 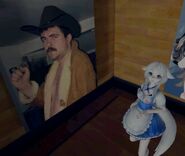 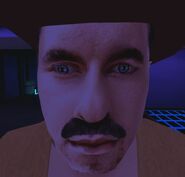 The scary eyes of The Sheriff.

The Sheriff with Raleigh Seren

Raleigh Seren, The Sheriff and Kee’ra Diamond
Add a photo to this gallery

Retrieved from "https://vrchat-legends.fandom.com/wiki/The_Sheriff?oldid=73013"
Community content is available under CC-BY-SA unless otherwise noted.