The Lair of Roflgator was Roflgators first world for VRChat created in Unity in 2018 which replaced the main location for The Gator RP Group's gatherings, which previously was The Great Pug. Today the map is no longer the location of the RP.

This article describes the state of things as they were throughout March-July 2018.

Astree (Temporary stay in the dungeon)

HeyImBee (Temporary stay in the dungeon)

Shrimp (Squatter/Sleeps in the bathtub)

What is The Lair of Roflgator?

The Lair is a map in VRChat that was constructed by 'Rob' Roflgator by ordering random stuff from Menards, Craigslist, and Costco. He got help from WiFiPunk to construct the place, such as lighting and some interior decoration. It is a relatively large map to navigate but offers great views into outer space and has a crudely cozy but lively atmosphere.

In RP, since Rob's Great Pug burned down, this place has been the go-to replacement location and meeting place for The Great Pug RP Collective. The multipurpose location serves as Rob's headquarters and base of operations.

The Lair is home to a number of hard working employees and volunteers under Roflgator's employ.

As the headquarters for Roflgator's operations, it has developed a roster of common patrons and regular visitors.

The Lair of Roflgator features several sections with their own specialty purposes.

Bar & grill, featuring a large dance floor. To the left is a lounge group with a "hot tub" and pole for construction purpose only To the right is a private bedroom that can be reserved for VIP.

Featuring the most exquisite animated space wallpaper and a greeting desk where the manager sits in front of a lovely blinking portrait of Roflgator.

Currently, Wooks the penguin has the position of manager.

A table with two chairs and a couch sitting on an island surrounded by water and a photo of an eye on the wall that is actually the drain in a bath tub. Very artsy indeed.

The personal table area features a sofa and an infamously haunted chair. The haunted chair was actually a hilarious week-long troll by Space Whale.

This room has several seating groups and stalls for dining. This also features a support pole.

A wide room with a mirror, table set, flat screen TV, a stool for R3dz to sit on, and a whiteboard with 'keys to success' on how to efficiently operate the bar. This also features a support pole.

The room features a mirror, a cage for his wife Ikumi (w/ lights), a flat screen TV, and of course the bed with a portrait of Rob's bunny bot form hanging over it. This also features a support pole, right in front of the bed.

Hidden behind a wall near the entrance is a secret fighting pit ('The Pit') used for Bloodsports UFC-style fighting. Usually, only fighters that wear leg trackers are allowed to participate. Exhibition and title matches are regularly held here.

Many spectators tend to place bets on these rounds, so be sure to attend!

On June 17th, 2018, Roflgator would remove the Blue Man Church and replace the section of the map with an underground dungeon that he calls a storage room. Attached to the dungeon is Roflgator's throne room, complete with a stone throne flanked by two dragons spewing fire. Behind the throne, the imposing effigy of Blue Man remains, continuously watching over Roflgator's back.

Rob debuted a new basketball court on the roof of the lair. The basketball is actually a galaxy ball.

Rob also introduced a so-called "hot tub". However this (scuffed) hot tub is short and ragged, resembling more a large ankle bath than a steamy oasis for bar-goers to relax. He has promised to get a better hot tub installed, eventually.

Located in the throne room, the six-sided dice was introduced on June 26th as a way of dealing with contentious situations. Each of the dice's sides are used as a form to punish someone that's done something off-putting or controversial. The dice is only used as a last straw and is mostly used to decide someone's fate.

Rob underwent a renovation of the welcoming bar, increasing it's size and presence and adding new dishes and larger plates. He would also add an alternate access to the bathrooms and actual stairs to the roof to access the basketball court.

Rob would replace the old Gator Bar counter in the club with a new stage for performances. He intended it to be a musical performance stage, but his wife Ikumi said it resembled more of a comedy club stage due to its confined, box-like dimensions. Nevertheless, he would keep the new stage, promising to make it better in the future.

The stage has been used as a multipurpose platform, from hosting NotValco's presidential inauguration, to a lovely dance performance by Forceable. 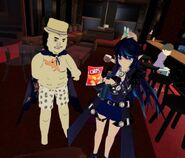 Some spectators during a fight in the Pit

The 'Gator Pole', one of the many 'support beams'

Weed hotboxing the bathroom, a common occurrence when he's around

The bathroom has a 'hole' between the bathroom stalls for passing TP. Spacebabe once sarcastically called this "revolutionary".

The church/chapel of Blue Man

Weed getting a lapdance from LenaLoo and PandawanBear dancing the pole 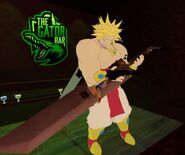 ChunChasku providing music to the dancefloor 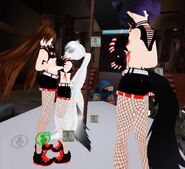 Roflgator and some of his employees and patrons on June 18th, 2018

Sorry, Kenzo, Buza, and Harly in the Pit

Cheese, Birdie, and Paige hanging out