"A place for intellectuals to gather and have nice discussions about bikes." - The Bike Lobby tagline

The Bike Lobby is a group of likeminded individuals that yearn to make the most out of a free game. Originally a group of bike enthusiasts that craved to ride the perfect Bike, it has since grown to include users from all walks of life, ranging from the original members to the worse degenerates.

Created on the 3rd of July 2020, The group originated from a small group of friends who came on the game everyday to hangout and have fun. Eventually this group of friends decided to make a discord in order to communicate with the mutes such as at the time only one person, Mofive would be the one to relay the messages of the mutes. This task became daunting as there would be three to four mutes who would normally message him at a time which would make it hard to properly relay all the mutes messages. So, it came to a group decision to make a discord which lead to Jujibi creating it and becoming the original server owner for The Bike Lobby discord.

With the creation of the discord a name was to be decided an agreement was made that due to Mofive being the one who people join off of normally it should be named after him. Mofive was known to roleplay as a bike and several members of the group thought it would be really funny to call it The Bike Lobby thus the name being chosen as that.

The group slowly grew as first a friend group which slowly added more and more members from friends+ lobbies which occur everyday. It then came a point that the original moderators decided that the group became more than just a group of friends but suddenly became a community. With this new found discovery big changes were made to transition to turn The Bike Lobby from a group of friends to a community. This eventually lead to The Bike Lobby growing into a wide spread community looking to Hangout, Host events, and More.

On July 13, PeterDG decided that the muteless life was too much for him and started searching for a mute to be with him. This was no ordinary hunt however as Peter wanted the best for him which lead him to offering a vast amount of actual money to Snowbreeze. Sadly, his offer was rejected as snow was too loyal to her talker .

On July 14, Peter found a mute to his liking by the name of Fawnde and started offering money for her to be his mute. Chaos broke out as Yianni and Cac_ also started offering her money which lead to The great mute auction vast amounts of money were raised and even bank accounts were shown. In the end Peter won and created a contract with Fawnde. Yianni and Cac_ were defeated but found out that Jujibi was willing to be bought. This lead to the second auction with Peter entering again as one mute wasn't enough for him although he had a ulterior motive which was to make Yianni waste his money. Yianni came out with the victory getting a contract with Jujibi. Reality was no one was a winner as these people spent money just for companionship.  These two days lead to the start of the "mute arc" for The Bike Lobby

The Race for Snake Way Champion

On July 28th, The first expedition to Snake Way started when chaotic evil butler, Dovakhiin decided to drop a portal to Snake Way as a joke. Most people instantly left at the fear of this grand challenge of conquering Snake Way even Dova himself left at the beginning. However two people decided to take up the challenge Lex Go and Neri to try to take home the title "Snake Way Champion". An hour in Neri decides to drop out of the race but Lex Go went. Eventually he prevailed after all the hardships and challenges and ended up being the first "Snake Way Champion" of The Bike Lobby. On the same day Yianni went on a solo expedition with voices inside his head and ended up conquering Snake Way becoming the second champion with the fastest time so far with 3.1 hours.

On July 29th, The second expedition, Mofive and other members of the Bike lobby decided to take on Snake Way with the Reward being title of "Snake Way Champion" most other members had given up next to halfway through however since Mofive was so persistent he'd change into a bench avatar and run the long vast road in hopes of finding the "Special Prize" at the end, however he may have expected too much from such a unrealistic virtue.

Mofive expected a big nice juicy prize after walking for almost 5 hours however other members of the bike lobby didn't tell him what was really at the end resulting in Mofive failing through the floor wasting 5 hours of his and the bike lobby's time in which shortly after he took a break for about 50 Mins before becoming reinvigorated to walk again.

Attempting to redeem himself Mofive returns but shortly gives up afterwards. Later that day, Kowalski conquers Snake Way by himself becoming the fourth ever "Snake Way Champion".

The Death of MeRoom

August 5, 2020, Panic struck The Bike Lobby as several members came to a changed MeRoom , a MeRoom that was not the same one they knew of. This affected Maverickmpm very deeply as the domain she onced ruled was ruined. The devastation of MeRoom lead to the decision by the members present at the time to find a new land to call home one that is more permanent and would fit the needs of Maverick.  The search began starting with a world called Deep Blue which showed potential but, was ultimately dropped as it didn't fit the the taste of Maverick so she threw a tomato at it. The next world the Single Room  which was created by the same creator who dammed the MeRoom. This world showed promise as it held the similar aesthetics the old MeRoom had which some expeceptions. These exceptions however were glaring enough to be rejected. This would lead to a meeting on how to deal with the new change and ultimately lead to deciding that there is no way of bringing back the old MeRoom.

The relatively small event was hosted by hammetteup & Schmeeb on August 14th, 2020. Over 300 people attended, spread between three private lobbies. The chosen date had no conflicts with events in other lobbies, and there was no drama created from it.

There once was a person who was respected by all, someone whom many look up to in the light of being a Batman of sorts against degeneracy. This man was named IcyyDingo there were many stories of his exploits of stopping his Australian friends PeterDG, Yianni, and Tonzey from falling into the hands of degeneracy. A quote that best describes this arc is a quote from the movie The Dark Knight, "You either die a hero, or live long enough to see yourself become the villain.". Sadly, the story didn't end with the hero IcyyDingo dying in his fight against degeneracy instead, this is the story of how he became a villain if you can call it that. 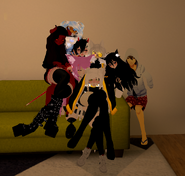 Usual day in the MeRoom 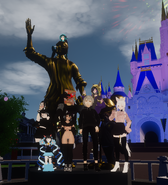 Meditation for the Bird Gods

Fxv and Eun, The Mutes in black
Community content is available under CC-BY-SA unless otherwise noted.
Advertisement