"Cracking a few cold ones with the boys!" ― ThatOneRebel

Club Manager of Neko Nightclub run by Lanfear and Oathmeal

ThatOneRebel, Kenny KKona or Rebel for short, is a longtime traveler in VRChat, having been in many groups since it's early days.

He is perhaps most known for hosting his own talkshows and his comical portrayal of roleplaying as "Kenny KKona", a character based on Kenny from the Telltale Games series.

As of Feb 2020 he has interviewed over 100 different VRChat personalities on his talkshow; Late Night with Rebel.

He also participates in Arcadums RP Callous Row where he portrays the character Rebel Ryder.

Late Night with Rebel is his talkshow where he interviews various VRChat personalities, many of them also documented on this wiki.

This article contains his personal story of his time in VRChat.

As a former member of the "Trap Patrol", he's known for wearing dapper, flamboyant suits reminiscent of classic 'pimp' outfits.

In 2019 he became the manager of the club Neko Nights Night Club, helping run it together with the owners Lanfear and Oathmeal.

"My journey starts December 10, 2017 this is the first day and when I first loaded into VRChat. I came to know VRChat by watching various YouTube compilation channels and browsing the livestreamfails subreddit. Seeing clip after clip from various Twitch streamers. I decided to give it a chance to try out especially since it was free to play and you didn't need a VR headset to play. Although very limiting you can still play enjoy the game to an extent without a VR headset. I remember loading into the “The Hub” for the first time and seeing a few players in a circle just chatting. This was back in the day where having VR was more rare and most users were in desktop. After talking to some local users and just chatting. I found out you can find “avatars” in the game. Big Al's Avatar Corridor was very popular back in the day for everyone to go for an avatar. Thing was though everyone used these avatars meaning duplicate avatars being used was very common. So I went to Cafe Leblanc which is from Persona 5 and a user pointed me to a secret teleport in the bathroom which lead to the velvet room and then another hidden wall to a hidden private world and then to a hidden avatar. I was using the Persona 5 main protagonist avatar Joker student version with Morrigan in the schoolbag. Many users thought I made the avatar and praised how amazing it was. I didn't tell anyone where I got the avatar since it was rare to see someone with it since it was hidden. After a few days of playing and getting a better understanding of the game I met some people and starting making friends. I met DragonFruit and Tosha (VRTrapman) within the first few days of playing. I actually recorded most of my first encounters in VRChat using a local record but I never edited or published the footage as I didn't have time to edit. I still have these early recordings that I plan to showcase one day."

"Around the middle of December and as the days went by I found myself playing more and more of VRChat making friends and having a blast. I learned that you could actually import models and worlds into VRChat. You first needed a VRChat account so I had to make one which meant I had to forfeit my steam account and any friends I met on there. I never used Unity or Blender before VRChat so everything was foreign to me but I found some various tutorials on YouTube of users teaching the basics of how to import a model and how to upload it to your account. The first hurdle was figuring out what model to import and represent me as a person in VRChat. Most people and what you still see today is MMD models which are mostly female models and in an anime style. I wanted to stand out and be something else. I decided to look at sketchfab for models and to my luck I found a Kenny model from Telltales the Walking Dead Season 2. It was tough for the first time how to do import and get the skeleton to work properly. The funny thing was the model didn't have vismemes or eye blinking at all. So my first Kenny was just a blank staring no lip sync model. The Kkona part of the model comes from the Twitch emote “Kkona” which is a meme that stereotypes Americans in the south as being redneck hillbillies with a thick accent. So I had Kenny from the Walking Dead sounding like he was a hillbilly from the South by putting on an accent and the legend of Kenny Kkona was born."

"I had many jobs in VRChat in which I created for improv RP as I play VRChat to be entertaining for my streaming audience and to be unique in the community. My first job was “THOT Patrol” which was helped by a friend of mine who owned the badge emblem that he created which floated above my head. I would go to public worlds like The Great Pug and roleplay arrest people for being a “THOT” which at the time was funny and completely for a joke. Some users in VRChat found this to be hateful and disrespectful and prompted to tell me that I was going to be reported and banned for this joke. I contacted VRPill on the Offical VRChat Discord to ask if the word is banned and he deemed to be disrespectful and hate speech. This is back in December of 2017 and ever since then the word “THOT” is actually banned in the game to say or use on an avatar. Fun fact there was a world called “THOT Prison” in VRChat around this time hence why I made myself the avatar to send people to this world as a joke."

"My next job which came after THOT Patrol was TRAP Patrol where I would go to publics and jokingly arrest anyone that was on a female model that was using a voice changer or trying to sound like a female. Again this was a joke in the community that despised traps as a meme. Most users in VRChat use female models because they are better optimized and customizable then male models. The THOT Patrol was changed to the TRAP Prison shortly after the world THOT was banned. Thus why I changed to the TRAP Patrol. Again I went to publics to find “traps” to send to the prison which lead me to meet a lot of close friends I still have today and hang out with. TRAP Patrol was never banned and I was never instructed to stop from a moderator but I quit the job by the middle of 2018 after it became a hit or miss with public people proclaiming I was harassing users with it."

"My next job was Pimp Kenny which was a full on purple suit with fedora and dollar sign cane in which I could pull out and even slap people. At the start I used this avatar as purely comedy relief and as a joke avatar I had for Kenny Kkona. After a while and quitting TRAP Patrol I decided to hire dancers in the VRChat community. Around April of 2018 full-body tracking became more popular common place among VRChat users. This is where users could actually dance with full body and show off their dancing skills. I saw the opportunity to become a “pimp” and find dancers that I could host parties at various clubs in VRChat to have full-body dancers. Ironically almost all of the dancers used female MMD models and put on girl voices to trap people. I guess you could say this was a 180 from my TRAP Patrol days. Around this time I slowly gathered more and more dancers amassing over 30+ dancers that have full-body tracking and great at dancing. I would go on to host parties every weekend at clubs to promote the dancers and have a blast. The names of the dancers are listed down below. One of the first dancers I did meet was J4key which lead to meeting Team Kinetic which is lead by Forceable in which he is the leader with his team which consists of friends that have full-body tracking.

After a while I meet many other content creators in the VRChat community and around this time I decided to involve myself with the RP community that has been creating and running various roleplay rooms and events. I knew and met Chipz(StealthRG) prior to the Club Rogue RP Crossover. When it was getting started I decided to join and roleplay as Kenny Kkona (Pimp) entertainment manager that was hired by Chipz to bring dancers and entertainment to the club. I would bring various dancers into the club including J4Key, Forceable, Lenaloo, PandanwanBear, Cece and many others."

Rebel, in his new Waifu model, usually hosts a talk show where he interviews the residents of VRChat.

Rebel employs a bunch of 'dancers' he refers to as his girls.

Involvement in the Crossover RP

Further information: The Crossover
"NOTE: Nobody knew this but at the time I had the dancers I brought actually act as spies in which theye would eavesdrop on conversations around Club Rogue relaying info to me."

"During the Club Rogue Crossover RP I was seen as a minor character that was in the background and was there for comedy relief by saying random things trying to run the club for Chipz. This roleplay is where I would meet many users from Joey Bagels crew including Joey himself, Oathmeal, Lanfear, Ashunera, KuriGames, Ikirum and others from the Loli Squad. After the RP ended I went back to roleplaying as a pimp running clubs on a weekly basis for while."

During his work there we went under investigation by The Polygon PD for sexually assaulting Belgore over a billing dispute at the club.

Getting hired by Oathmeal

"Currently I am employed by Lanfear and Oathmeal at the Neko Nights Night Club as a club manager to maintain and run one of their clubs. My job is to find people to work at the club for the Neko Sisters. Recently, Joey Bagels was hired to be a club manager as well. Working together with Joey our aim is to find individuals to hire and work for us at the club." 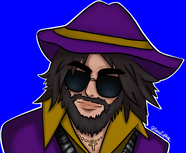 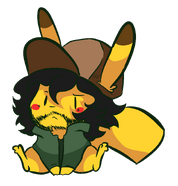 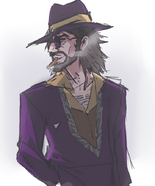 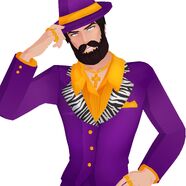 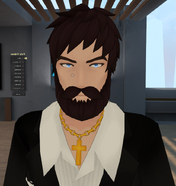 Late Night with Rebel talkshow
Add a photo to this gallery
Retrieved from "https://vrchat-legends.fandom.com/wiki/ThatOneRebel?oldid=94092"
Community content is available under CC-BY-SA unless otherwise noted.