Neon Light Blue
Talus Nova is a Novakid forgemaster working in his shop Quasar Works in Callous Row. He had an apprentice named Duncyn Kuiper who worked under him but has since quit.

Living a middle class lifestyle Talus tries to avoid the eyes of the corporations while working to get off the planet. He is played by TwinSwords.

Drawn to the recent emergency of magical energy, Talus found the planet Corvanis 3 and it's lone Savior City. He decided to explore it for its unique qualities, alone. Making his way to the lower regions of the city, the darkness and lack of energy to consume left him weak and trapped among the denizens of Callous Row. Upon an attempt to make his way back up to the higher reaches, Talus was stopped by representatives of Quixote, they wanted to use his unique physical properties for their own gain, to create better and more unique weaponry and technology. Getting away from their greedy hands, Talus went into hiding. Growing weaker by the day Talus needed some sort of energy to survive or risk burning out or even worse, his body's eventual shut down and doing as all stars eventually do, go supernova. While researching a suitable source to keep himself stable, Talus finds one of the many large crystal like power generators for the city below the streets. In an attempt to save his own life, he locates a cybernetic enhancement shop to don a new arm that could harness the crystal's power and convert it to his own. Being low quality and not very effective, the arm works but only just. Attempting to stay out of the eye of the corporations Talus purchased himself some local clothing with what money he had to hide his appearance around to those he deemed untrustworthy. To keep himself busy and to fund his eventual escape, he set up a living quarters and a shop in the same market he acquired his arm from. The energy that radiates from the planet intrigues Talus and calls to his own energy. When not looking for answers to why he was drawn to the planet, Talus keeps his attention sharp for any and all clues to aid him in upgrading his energy storage and consumption, information on his lost ship and stolen belongings, staying out of the the watchful eye of perusing parties who would want him, or at least his star matter, for their own.

Upon the quarantine being lifted for the first time, Talus set off to check on the status of his shop and its stock of materials. While doing so his apprentice, Duncyn, attempted to arrive late but didn’t do so successfully. Talus then, after some talks with Duncyn, went to check on any old mail deliveries with Ori. Only having bills and one old shipment that Ori was requested on acquiring, Ori then requested to meet his new apprentice and check out his shop. After a bit of poking fun and conversation the three decided to walk around Callous Row to check everything out, which turned out to be pretty eventful. With the day coming to an end the three set their sights on the relaxing atmosphere of the noodle restaurant.

After both Duncyn and Ori went off to their apartments and Talus did a little bit more poking around in his shop, He was then approached by Rook, who had a little job for him, Talus being the only thing left of what the street samurai had been. Rook revealed to him that he was an informant and showed off his underground base, they set off on what would be the first Shadowrun since the quarantine had been lifted. Getting his payment and gaining his now new informant acquaintanceship, Talus went home to ponder on recent events and plan his next move.

Together with his business partner Athologoth they've managed to develop the weapon grade material "Hard-light" and are working on turning it weapon grade. Their secret project was leaked by Becky to Jack who are the only ones who know about it so far.[1]

Talus met his ultimate demise when he fought a giant spiderlike creature when assaulting the necromancers lair. His sacrifice helped free Rook who had been captured.

Talus and Duncyn Kuiper in front of their shop Quasar Works. Being shown by GU1D3-B0T.

Talus and Athologoth meeting Rook in the back. 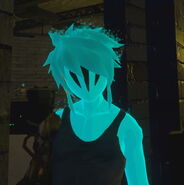 Talus at the shop 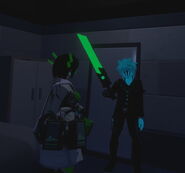 Recovering a stolen sword together with Oriana and Rook from Duncyns apartment. 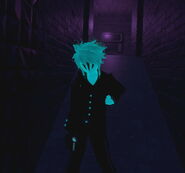 Talus on the streets of Callous Row

Injured talus after being touched by the shadow

Disguised
Add a photo to this gallery

Retrieved from "https://vrchat-legends.fandom.com/wiki/Talus_Nova?oldid=73017"
Community content is available under CC-BY-SA unless otherwise noted.