Red
'TFMJonny' or 'Jonny' is a singer, performer, streamer and roleplayer in VRChat. He occasionally sings at the stage in various pubs and clubs such as The Great Pug and has participated in many talent shows.

He occasionally visits The Golden Gator where he has performed a handful of times as well as portrayed various RP characters. There Roflgator has attempted to set him up on various dates with women to mixed and sometimes hilarious results. Whenever he's around he's usually followed by a girl (or two) at his side, sometimes referring to them as being a part of his 'harem'.

Having participated in Nagzz21 VRChat Adventures 2.0 in the past, his most recent RP persona is possibly Alfonsolona Nkosi when participating in the futuristic sci-fi Callous Row RP.

This article focuses on Jonny's persona in VRChat.

A Singer of Amazing Talent

He attended Skygazing's talent show singing on stage on July 22nd 2018. Some of the participants were Campleroy on guitar and the dancers NoLogicDavid, Shaheena Evelga and UniCornJubs. Following the talent show he became an occasional visitor to Roflgator's bar.

On Sept 12th 2018 when visiting The Bricktown Golden Gator he was asked to perform by Roflgator and entertained the guests by singing on a table.

Wearing a Gordon Ramsay disguise on Sept 30th he kept The Bricktown Blocks distracted from their usual criminal schemes by tricking them to attend his cooking show. The same day he claimed Ectreloot was apart of his harem but she denied it.

On Oct 10th 2018 when Vincent RX and CatBugCry were on a date organized by Roflgator he serenaded them by singing Creep by Radiohead. He was unable to complete the song without tearing up and expressed his trouble with performing the song that his mentor is best known for. After having a bit of an episode he was later seen that night throwing up behind a dumpster.

He returned to visit The Golden Gator again on Oct 21st 2018 looking like a shadow of his former self. He was drunk, smelled bad and looked somewhat of a bum. He explained that he had cut ties with his former manager Skygazing.

Eventually after several months he undertook a rehabilitative program, Jonny eventually cleaned up his act and was able to fix himself out of his homeless state and return to top form as well as singing around the Metaverse once more. While he was fixing himself, he discovered after much reflection that he needed to fix something and in that epiphany he changed, becoming much nicer with a more approachable demeanor. After meeting Joey Bagels he became much more humble.

Meeting the most beautiful Neko...

At some point around Nov 21st 2018 whilst performing at The Box he encountered a woman who was watching in the audience... she had fair complexion to her face, she had soft ears and a brightly shining blue eyes, that woman was Victoria Savannah Lockheart. Whilst he performed on stage he could not help but look at her direction. They both then catch each other's gaze only for Jonny to look away suddenly. After the performance he then went to meet up with his sister Sugar Cubes and some other friends.

Already at the location was the Neko who kept herself at a minimum distance and observed the ongoings... Jonny was then doing a reading of storytime by the mirror wall of the place, seeing that he was getting cramps after his performance she approached him. She smiled at him and then gave him a light massage soothing the singer in which he read out stories... At the close of his reading the Neko then sat beside him and gave him a hug.

The first date with Victoria

Preparing for the date…

While at the Avservatory, Jonny who was live vlogging the date asked his fans on what he should wear for the date. Choosing a variety of outfits, a colorful and absurdly bright outfit chosen by the Tide Pod Loli, switching over to a less abstract coloring by his roommate Stefan, he didn’t feel it was appropriate. A fan then suggested if he had anything blue to which he then does so. Arriving at the homeworld of Jonny, Victoria then appears dressed for the occasion wearing a beautiful kimono-like dress. Matching colors too. Going to the Dragon’s Buffet (this world must be really popular for dates), Jonny then offers Victoria a selection of food. The Neko then chooses to eat a more healthy variety before immediately grabbing a few desserts.

The Wedding Singer then immediately takes her to verHack, a world of simulations and included in it is a drawing room. Victoria then became interested with its bar only to be disappointed to discover that it was broken. Checking out the next room, they discover a photo booth where Jonny enthusiastically asks her if she wanted a picture together, the Neko solemnly agrees. Taking a few moments to refresh herself she then takes the photo with her date.

Taking a few moments to try out the simulations, choosing snow and autumn and spring. She was enthralled by its beauty and explored the surrounding area. Looking to see more rooms, the couple then advanced to the next chamber; the drawing room. They then draw portraits of each other, with Victoria designing a somewhat accurate portrait. Moving to the next location of the date, Jonny then decides to choose the zoo. Taking a browse of its many animals; Victoria showed a particular interest in one animal a certain Fox. The zoo’s temperatures were blistering if not too hot for those wearing dresses…

Taking her to the final place of the date, they then explore the beach, finding a barbecue stand and roasted some kebabs. As nightfall approaches the two then walked by its sands enjoying the glistening sight of the sea and sounds of the waves that flowed by. In the moment Jonny then leaned giving a kiss, under the night sky that loomed she reciprocates the feeling… the two then bid each other goodbye both enjoying their night together.

A Valentine's Night to forget...

On February 14th 2019, Jonny begins another live vlog of his show as he waits for Victoria to arrive, his maid; Shizu preps him up making look as slick as ever. Not a moment too soon Victoria arrives, greeting his date he informs her of their agenda for the evening, he then calls an Uber to drop them to their first destination...

Jonny is confirmed to be part of the Adventures 2.0 era of Nagzz21's VRChat Adventures Livestreams.

The DNA Test and Confirmation

One day at the Great Pug, meeting the many strangers & inhabitants of the Metaverse. Joey Bagels encountered Wiz who somehow snuck into the establishment. He then spotted Ozymandias (the scientist loli) and Suchipi in which Joey decided to have Wiz undertake a DNA test to confirm if she's Jonny kid. Jonny having caught wind of this rushed to the Pug immediately and asked her if she was causing trouble... Wiz nodded signalling she wasn't. Now that the father is actually there, the DNA test will be "even better!" as Joey says.

Suchipi then proceeds to take a sample of saliva from the singer and places it into Ozy's machine gun tester. While the sample was being analyzed, Ozy calibrates the machine which was then primed and ready to fire. Suchipi then warned everyone present to get back as the testing procedures happen as "the bullets may spread". Ozy then fires! On the receiving end of the barrel was Boxfinate who was shot by the 'non-lethal' bullets spraying the wall with sparks. The test was a success! Wiz was then confirmed that she is indeed Jonny's kid.

"Do you like my "balls"?" ― Stefan, referring to his cooking

He is a foreign tourist in Bricktown and seems to be completely unaware of the meaning behind American culture or ideals. Being easily influenced he also falls victim to political agendas and all kinds of various conspiracy theories.

At some point, Stefan for the first time encountered Chipz when they somehow bumped into each other randomly while in the Great Pug. He then took to presenting his meatballs to him as well as Folkona who also happened to be accompanying him.

Alfonsolona is another persona created by Jonny when he found an avatar that describes "new-age thespian". An eccentric and charismatic fellow, Alfonsolona is an individual with a dramatic flair whenever he is speaking. At times he is accompanied by his butler Sebastían.

He wears nothing but a robe because he believes that clothes are a human construct and that his celestial being does not subscribe to such things.

He can be constantly heard muttering some weird things about the universe or how that we are stardust. In reality he is just a rich-kid from South California with nothing better to do but couch surf and hitchhike because it's "trendy".

Alfonsolona Nkosi, known as 'Alfons' for short is a reinterpretation of Alfonsola but set in a different universe-canon when Jonny participates in the futuristic sci-fi Callous Row RP hosted by Arcadum started in Oct 2019.

Alfons is a reporter who used to work for the ATLANTIS Corporation where his father is an upstanding and rich businessman. He is the intended inheritor of his fathers exploits but they never see eye to eye. Contrary to his father Alfons has a caring heart as well as a conscience, wanting individual rights for the less fortunate that the mega-corporations abuse as trash.

Choco the anime boy is a resident of Bricktown and works part-time as a bartender at the Bricktown Golden Gator. He often gets dragged into various intrigue and events at the bar.

On Oct 26th he was asked to dress up as a trap by Roflgator to go on a date with Titch. He complied but Titch did not seem happy about it.

The Choco character was retired by Jonny and is no longer part of the RP.

Jonny singing on a table in The Bricktown Golden Gator.

Jonny singing to Kimple, HeyImBee, and others 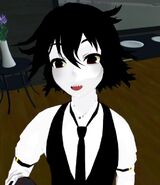 One of Jonny's avatars 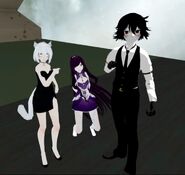 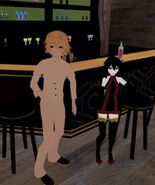 Jonny poses for a photograph with a Neko. (2/2)

Singing at The Golden Gator

Nayuki the Fae and Jonny 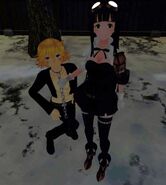 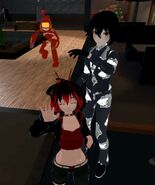 Jonny and OlyPearlGirl1 at Necro Nights.
Add a photo to this gallery 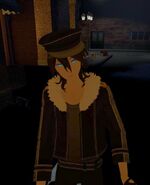 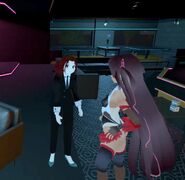 Titch tricked into a date with Choco cross dressing... 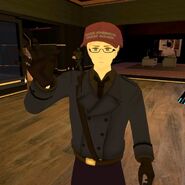 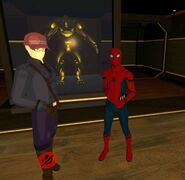 With the other anime boys NeonLlama, Mute Max and MyDudeGideon

Choco being an unfortunate bystander when Mute Max was murdered. 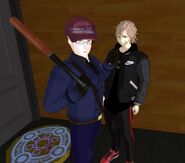 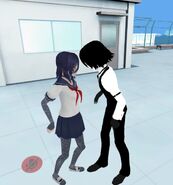 Portraying a music teacher next to Peppymint when participating in Roflgator School RP . 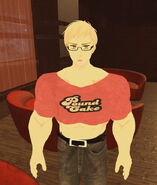 Stefan visiting The Royal Gator
Add a photo to this gallery
Retrieved from "https://vrchat-legends.fandom.com/wiki/TFMJonny?oldid=94173"
Community content is available under CC-BY-SA unless otherwise noted.