Red
Static was originally a cleaning robot intended to clean for the Sweepo company in streets, workplaces and homes of the residents of The Row.

Breaking free from her initial programming she is now an agent for "The Shattered Legion" a resistance organization led by Rook that is gathering allies to battle the mega-corporations.

The Sweepo Cleaning Company (SCC) created Static to show that the company could upgrade to a newer model of Sweepos with human characteristics and interactions. Without a large budget they constructed her from used Sweepo parts. Without really completing her, she was shoved into the streets and encountered problems.

Attempting a second upgrade she was installed random spare parts originally intended for security robots but had her combat functions switched off. They did not think it would affect her actions while cleaning but they were wrong.

Static was recruited into "The Shattered Legion" by Rook, who believes that intelligent machines - "synthetics" - are worthy of person-hood. The skilled hacker Faye, Rooks ward, analyzed Statics code and found trances of manipulation. Static expressed worry that her parent company Sweepo would possibly take control over her again, using an unknown trigger to force her to turn violent.

She lost her wits defending "The Grindstone" and chased out everyone from Rooks bar. Rook would afterwards blame it on a virus infecting his robots without mentioning having reprogrammed most robots to his cause fighting for The Shattered Legion.

Showing signs of changes in behavior it eventually became clear that Static is inhabited by multiple other conscious entities with different personalities. Static herself, "Virus" as well as one named "Rage"

The New Job/Not the monster you though you where. - S2

Some time past for static after she was called a "monster" half her life in the Row, and friends soon dying all around her due to problems she was unable to fix, she was offered a job by Doc U to work in the med bay to show everyone she was not a monster but a gentle giant to all. Static enjoyed the time she spent in the med bay and would soon realises that she had a place she could call "home" and found herself growing stronger to make synthetics like herself feel that emotion, that there is a home to all and nothing bad would every happen.

However, Soon after static would still have that burning problem with grief and found herself trying to become a leader like "RG" was to all synthetics before she was called "monster" to everyone as well as the reasoning for synthetics was being given a bad name, she tired to push past it but soon had a moment that changed her life and her view on a lot of things, she would follow taxi around the row and only talked to him about her problems, as Taxi was the only friend that understood static and stopped her form doing a bad mistake back when she was mad at Leilani for killing RG, Static nearly killed Leilani but had Taxi stop her.

Static still works for the med bay and enjoys the new people that moved into the row, some say making new friends clears out the bad coding left behind back in the early days of the row, when many people saw her as a monster but now see her as a gentle giant that she always dreamed to be, she has meet many new people a long the way but also enemies on the side and she still thinks about the days that many peoples life's where lost in the row. However, Static kept going on to fill her adventure but encountered some problems along the way, the time spend was soon forgotten when she was damaged and her memories were a bit fuzzy only remembering parts of who she was but now due to some "upgrades" she was given by Monty now gives her a new clean start, but yet she would still be the same person... right, I guess you can say "The seeds of doubt where now planted" and the fun will soon begin once she understand the problems she now faces. Who is the problem.. and who is she now... who knows, many people believe she can now give people "Clarity" and still have "statics" though along the way.

Being made of a hodgepodge of different parts she was infected by a virus with its own conscience. Showing symptoms of loosing herself and suddenly acting differently she inhibits multiple personalities fighting for control over her body.

The calm, caring and kind personality that Rook first recruited into "The Shattered Legion". Static cares for other synthetics as well as living conscious beings.

An infection which took over her, showing less if any care at all for other living beings. When Virus takes control she is prone to attack with little provocation. She is easily recognized for being in control over Static as she laughs evilly or maniacally when surfacing.

Since an attempt to isolate and remove Virus by an effort from Rook, Guidebot and Faye working together she has become more lenient. If not because she actually cares but only for the benefit of her own self preservation.

With the help of A.L.Ex, Virus accepted static and works together to become a "Better person" not having the best knowledge of social interaction she "tries" her best to help out anyway, she still enjoys messing with people and tends to enjoy striking fear in others but always apologies afterwards mostly.

A recent possession of static, attacks brutally whenever provoked and has so far outright nearly killed some inhabitants of The Row.

Rook fearing it killing him if attempting to communicate directly, asked Static to "splice" with her "Rage" persona on neutral grounds in the virtual world. While there they met A.L.Ex. a virtual entity. With little success in convincing "Rage" to give up control they could agree to coexist to a degree when threatened to be destroyed. 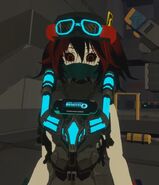 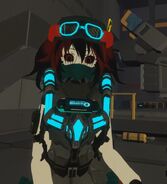 With Cleo and Raleigh Seren at Rooks bar. 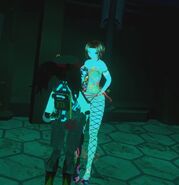 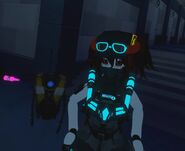 AIM-3 and Static are recruited by Rook

Preparing with AIM-3 before an attack and robbery of a Mars-corporation patrol. 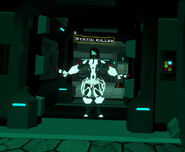 Taking cover with RG-2 and Rook behind barricades when a corporate presence is announced and they come in shooting.

With Greasepalms and Cap Fawkes 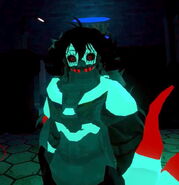 Rook speaking to Rage in the virtual realm. A.L.Ex. looks on in the background. 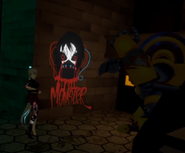 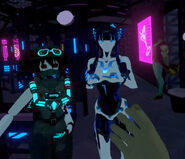 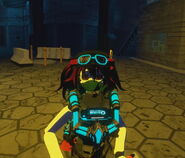 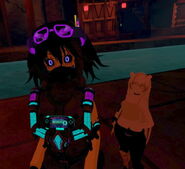 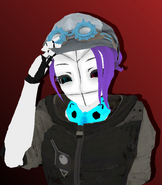 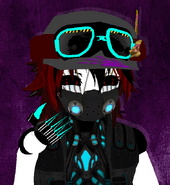 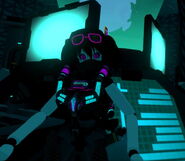 Eden Artwork Made By StaticKiller