(Officially claims to not be a part of any group, however)

Unknown; appears to be humanoid

(It's accepted by some that Spaz is a reanimated zombie)

Heterochromia (purple & yellow)
SpazKoga is a mysterious being in VRChat, who lives on scaring people, eating flesh and loving Gumochi.

The real Spaz is a dedicated roleplayer and a sweet but tsundere femboy (he himself has admitted this).

No one knows exactly who or what SpazKoga was before she died 600 years ago, theories run rampant, ranging to her being a puppet possessed by multiple spirits, to a flesh golem, to a zombie, to straight up a demon. Spaz is the only one who knows these secrets, and she doesn't plan on revealing them anytime soon.

Spaz has many ways to torture and scare people, ranging from growing to large sizes and eating the heads off bodies, to vomiting blood. One of her major ways of 'loving' people is injecting them with a syringe. No one knows what's in this syringe, to the point where Spaz doesn't know herself.

Another one of her more famous scare tactics, is literally snapping her own neck and falling to the floor.

When the voices take over

SpazKoga has a form where, after letting the voice or voices takes over her mind and body, soaking her with blood (theorized that the blood is from undone stitches on her body), and she becomes more violent, prone to biting people, and even vomiting blood on them.

Elise is a student in Arcadum's School of Forbidden Knowledge. An RP that ran during the summer of 2018.

Faye is a young woman in charge of security at her mentor Rooks bar - "The Grindstone" located in Callous Row the slums of the futuristic Savior City. While physically weak and mute from an injury she is skilled with electronics and computer hacking. She works as an inventor, building devices in exchange for money.

Callous Row is a futuristic cyberpunk roleplay hosted by Arcadum.

Spaz hanging out with Drekwiz and some sack people, July 2018 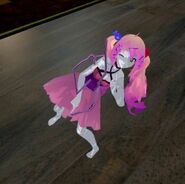 Spaz posing in the The Golden Gator 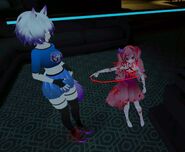 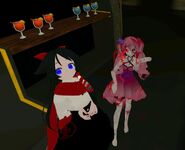 Claiming Zager as her pet... 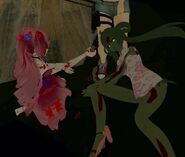 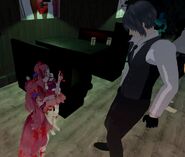 Spaz with twin Actcizor pose in front of Meech

Meech is dumbfounded.
Community content is available under CC-BY-SA unless otherwise noted.
Advertisement