What is 'Sora Fantasy VII RP'?

The Sora Fantasy VII, Sora's Adventures or Sora's Party is the name for a lighthearted group of roleplayers in VRChat. This group focuses mainly on the adventures of Sora and Vee who are alternative characters for the people who portray them.

The world in which Sora Fantasy VII takes place is a fictional 'beta' MMORPG in which there are both actual players and intelligent (to various degrees) NPCs. As the game is in early mode a lot of unexpected things can happen. Recurrent elements of the scenery borrow themes and inspiration from games like World of Warcraft, Final Fantasy and other JRPGs. Together the party plays on a PVP server and not a RP-PVP server.

The group creates semi-scripted scenarios that are planned beforehand but where only some participants know what is going to happen while others are allowed to improvise to those situations. This article page attempts to list the characters, people who portray the characters and people who participate in the roleplay.

In the lore, Sora Fantasy VII is a Playstation video game that Chipz plays in his free time, possibly with others. The original beta release of the game had at least 21 discs, and was unfinished. The assumed final retail release has at least 2 discs.

The groups current mission is collecting 'Watermélons' for food for Vinny. An optional objective is to gather Anuse-amulets (10 to create a Vagene Amulet for Vee to get stronger).

On Aug 30th the series was rebooted as the fictional game had finished development and was released in full. This resulted in Sora loosing his save file having to restart the game from the beginning.

WIKI: Please assist in adding missing information to this article!

Differences between the beta and new releases of SFVII

The following lists the current party members in the group.

Past or temporary party members

The following lists past or temporary party members of the group. This includes members that were present in the beta version, but disappeared, or haven't joined yet in the new release. On July 25th, the party formed a guild named the Soon Foxes in the beta version.

The following lists characters that the party has interacted with but who may not actually be part of the group yet. This list includes the beta version characters that possibly been dummied out since.

Sora's party members as of 12th of July Charles, Fluffy, Vee and Vinny 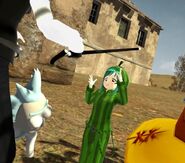 The party fumbling through the darkness

Vinnys wife Barbara is murdered by an enemy

Pixel art made by Elias1
Community content is available under CC-BY-SA unless otherwise noted.