"I will never give up. I will show everyone my will." ― Soma

Soma currently serves the Waifuwehr of the Federal Waifu Republic of Germany as the Oberkommandant and Generalarzt in the Sanitätsbattailon.

Soma T. Schnee is a girl who shows a lot of personalities and loves making friends.  Who were her past family members you might ask? Well... during the 1940s, her great-grandmother, Soma T. Wolff, left her position as a Veteran(Reichsjustizminister) without a word. She left, avoiding anyone(except her family members, but not Tobias) avoiding anyone she was friends with from the military or close. She found a simple town in the woods, which would be called Triberg in Schwarzwald in the future. She adopted a child, much like herself in the past called Aurora von Halt. She had beautiful white and blue hair and she had ears and a tail like a fox. Miss Wolff lived with Aurora in a simple cottage.

Aurora was always curious why Miss Wolff had such sorrow. She never told Aurora until she was old enough to understand to tell her the heartbroken tale about her past. Time went by and Aurora became an adult and she got married to a man called Henry von Schnee. They decided to keep the last name Schnee from the dad's side. Her dad never had told them that he had someone before this, but later told Aurora when she was pregnant with their child. The story was he was with a woman called Victoria and she was an American, he never knew she was pregnant with his child after they broke up, and he went back to Germany where he met Aurora. They eventually had a daughter called Soma von Schnee. Soma learned medical education from her mother and grandmother who was also living with them, but soon she became ill.

Aurora and Soma tried all they can to keep her healthy with the knowledge they know through medicine, but she wasn't getting any better. Miss Wolff's time is about to come and everyone around her started to cry. Miss Wolff told everyone one by one to come into her room so she can talk to them individually. It was Soma's turn and she called her in. Soma came into her grandmother's room, sitting beside her and her grandmother began to talk to her, "Little Soma, always be there for your brother no matter what." Soma asked, "Why grandmother?" Miss Wolff replied "For I wasn't there for mine when I left the military and retired... I left with such short notice. I was afraid that everything happened so fast... I felt so guilty for not even leaving a letter." Miss Wolff grabbed a letter from her drawer next to her. This letter looked like it was for a person called Doctor Tobias L. Adler. Miss Wolff then continues, "I wish I could give him this... Never lose that will that you always have Soma." Miss Wolff calls everyone in and says," I love you all and I will always be there in your hearts." She breathed her last breath and passed. Everyone cried and so did Soma, screaming.

Soma T .Wolff left a hole for this family after she passed. This family loved her even if she thought she never had a future. They berried her next to the house and they prayed. The family stayed strong and got better as for Soma, she decided what to do for her future and go to the Army. Before she left for the army, she was told as well she might have a half-brother in America. Soma couldn't believe this, but one day she was going to find this half-brother and go to America. She replaced von for Triel, which was her grandmothers middle name. She became Soma Triel Schnee. "Grandmother, I will make you proud." Soma keeps this letter from her grandmother and earrings she received from her as well. Soma left her family, waving them a goodbye, heading to boot-camp to become a soldier. Time flies by and she eventually became a Officer in the medics. She continues to help those on the field in need, never loosing hope. She heard that a man called Tobias is in the general ranks and her objective is to give this letter to him in person who came from the past. She gave him the letter, and he is a relative of Adler, but after some talking about their grandparents, Soma and Tobias kept in contact and became friends.

Soma as of right now made many friends including a man called Alfredo, Luna, a shy blonde girl, and Tobias, a sweet-hearted man. Soma is known to be very nice in character, but as an officer, she is two-faced. She shows a lot of passion and aggression. She also has a aggressive part of her. While being an officer, she did some checking around medical documents and such on a person called Gino T. Pfeiffer. She read it carefully and started to sweat. She thought to herself, "Wait this can't be my.. half-brother.. can it..?" She found out that her half-brother was in the same military she is in. She plans to meet them in do time.

What is in store for her in the future? Much more to come. 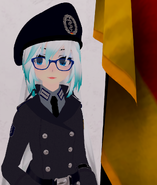 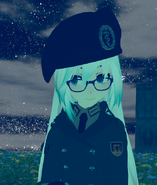