"Ooooh dear. This is not where I intended to go." ― Sock

Sock is a cat in a hat who specializes in using portal magic. He is very focused when on missions but when he’s not adventuring he’s just a silly cat on a mission. He is a member of Aegis and second in command of the Ethics Committee. He is played by Silent Sock.

Not many details are available to the public, but to those that have encountered him or heard rumors about Sock will tell you a few different stories that they've heard. The most common threads of information that can be gleaned from this are as follows.

He is uncertain of where he was born and where he spent his time as a kitten, although it is speculated to have been in a rural town, though in what country is not known. The time between this period and the next is unclear.

Some years after his supposed birth, he was seen a few times in the company of one other person, some say that this other individual was an elderly wizard or sorcerer. Some more outlandish claims state that it was a dragon or even a devil of some description. While this is unclear, one thing seems to stay the same among all of the rumors: Sock had grown up into a full Nekomata youkai and was now this person's familiar.

After this, details once again become more scarce, and for a much longer period of time. The rumors only pick up after another thirty or so years later, where Sock would start to be seen walking around without his master. Travelling around as if he had a goal in mind, but to seemingly random locations for varying periods of time.

Another thing to note about all of this is the fact that while he was seen with his master, he was also carrying around a few items that he now appears to have misplaced or lost, with one glaring exception, he has gotten a new one: a glowing blue crystal that he now wears around his neck.

Sock between October 10th and 17th had an interview for Aegis recruitment.

On November 7th Sock attends the Aegis induction ceremony at the Stranger’s Cathedral where he is accepted into Aegis core. After the ceremony takes place he stays in the cathedral with Bream, Azreal, and the other Aegis recruits, while they wait for their chance to attempt Beedle Vaughx’s mission. He spends time getting to know his fellow members and comes up with a plan with Blinx and Konton to get on squads together by pretending to dislike each other. Once the first group returns Sock and the other recruits are teleported to the whispering forest where they fight the ZOO, a menagerie of monsters collected by Beedle. During this fight Sock is one of the members to be knocked out by Beedle’s cat. After the fight he is woken up and continues with the squad. Near the end of the mission their final task is to land a hit on Beedle which Sock attempts by opening a portal in the center of Beedle in an attempt to bisect him. This doesn't work as Beedle splits into 2 Beedle’s for a moment before fusing together again. The other recruits make their attempts and are also unsuccessful. They soon return to the Stranger’s Cathedral and heal up from their wounds after a semi-successful mission.

While visiting the Cathedral one day Sock is approached by Blinx about joining the ethics committee a club he was forming within Aegis. Without any other members Sock felt sorry for the fox and decided to join becoming the second member of the ethics committee and the beginning of their plan to make the universe ethical. The two have become close friends since.

One night at Quill’s Tavern Sock was approached by Krazhul concerning the strange object hanging around his neck. Krazhul had thought it was a dracolich eye but Sock explained that it was an egg given to him by his old master who was a dragon. The final request was to bring the egg to his hometown however his master died in this town and due to a disease he had mass destruction took place making it difficult for Sock to complete this task. Krazhul offers him a deal to help the cat as he is fond of him, to which Sock begrudgingly accepts not trusting the lich.

Sock is very mischievous planning small pranks and taking things from others. Much like a cat he also knocks things off shelves. He is quite cowardly often trying to avoid fights. He is also friendly and not to serious often making jokes or cheeky puns. But when it comes to an actual fight he is capable and becomes serious knowing that one misstep could cost him or someone else their life.

Sock does not know much of his origins not knowing his real family if they even exist. He was however raised by his master, Aberyn Vatumal a dragon who served as his mentor and family. 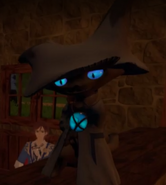 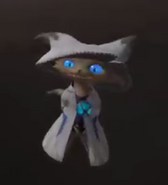 Add a photo to this gallery
Retrieved from "https://vrchat-legends.fandom.com/wiki/Sock?oldid=80271"
Community content is available under CC-BY-SA unless otherwise noted.