"847713807", "The Champion" or "Skully" is a robot built by Henderson McCuldger and Zax Prowler to fight in the Scrap Town arena.

On his premiere fighting day on S2 E22 in the Thunderdome Arena, he didn't quite live up to his name, losing one fight and winning the other.

After fighting he was stationed to keep the citizen of Scrap Town safe from hostile threats and is often seen patrolling dutifully.

He was upgraded and equipped with a harpoon gun and a rocket launcher.

Defending Scrap Town following the invasion of enraged fire elemental spirits on S2E25, he was destroyed beyond repair.

Rebuilt again as unit "SKU2Y" a year later, though lacking his old memory, he continues patrolling the town once more.

Skully and McCuldger before an an arena fight in "The Thunderdome" 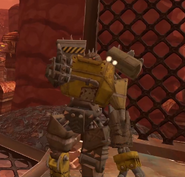 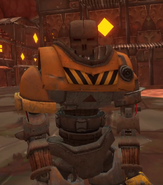