Sister Lumera is a magic wielder of an unknown religion worshipping light in some way. She wears an unfamiliar triangular symbol covering her eyes and face.

She appears to be a plot-device character in Callous Row RP currently portrayed by Folkona.

Appearing first in Callous Row season 2 Episode 5 Lumera walked the streets of The Row looking for gatherings of people, possibly in order to spread her gospel.

She walked through the streets of The Row, asking if there have been any gatherings that she may attend. Many walk by her feel a strange urge to follow her, and some do. She enters The Dirty Diamond brothel and as she does, those magically inclined feel a sudden alarm start akin to a bomb that is about to go off in the room - specifically for the proprietor Kee'ra and the CEO of Talaris, Damien Masaru who is present in the brothel. Damien calls out for an evacuation that is supported by Kee'ra and moments later the brothel is emptied out quickly and Kee'ra stands face to face alone against this new priestess. Staring at each-other Kee'ra can feel the priestess challenging the magic inside her akin to a beast that starts to awaken. The two women start to argue about their difference in magic, one primal - the other faith-based.

As Lumera leaves the brothel Kee'ra can feel her self control slipping and dismisses her dear friends to leave her alone. Feeling an urge to drain the very life out of those she call her dear family scared her immensely, especially that it took all of her willpower to resist those urges. Who is this strange priestess and what were those alien beastly instincts surfacing within her?

Walking the streets of The Row, praying 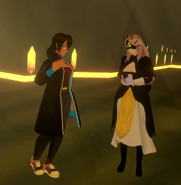 Evoking some sort of magical opposition towards Kee’ra Diamond

Keera and Lumera are enemies and know it, but not why