Knight of the Wisp

"Let fortune fall on those whom I fall! Go brave in to that night!" - Excerpt from the Knight's soliloquy

Sir Polka (first known as "The Nameless Knight") is an autonomous suit of armor who travels around various locations serving his masters, whomever they may be. He cares for nobody, only himself. Before he decided on a name for himself, he often went by the surname Halt O'Carrick. It is however unknown how he acquired this name or why he uses it.

Sir Polka was created by accident, he first awoke on a pedestal in a finely furnished room, in a high class mansion and eventually stumbled upon his new master, inside what appeared to be a laboratory. Soon after he began learning the ins and outs of being a “Butler”.

As his master grew older and more fickle, so too did Polka's flames. Noticing the parallels between the fire of life and his own life, Polka’s master eventually transferred ownership to a younger man, and thus the fire grew strong. And so, Polka and his “instructions” were passed down over the years, from wealthy businessmen to ruthless bandits and outlaws, Polka served utmost and faithfully.

Eventually, Polka found himself protecting a young man who went by the name of “James.” James had resided in High Class upper districts of Savior City, and had drank one to many at the bar. Eventually stumbling into one of the many casinos that line the streets. Unwittingly, he started gambling with some powerful individuals within a local crime family. Following this, James suffered from crippling debt, and eventually said gangsters caught up with James. Knowing this could very well be the last day of his life, he unbound from Polka and sent him to the only man he could think of. Once Polka appeared on the doorstep of a man who abhors magic and all magical creatures. Not even a cry from his old friend would change his mind. He threw Polka into the garbage and spouted “Go serve someone who cares!”

All trash chutes in Savior City lead to the same place. Polka found himself in a scrap heap, unsure of his next move, his last order echoing through his mind. “Go find someone who cares!”

And so he did.

As a nameless knight, Polka's morning begins with him sifting through the cardboard box he calls home. While he's making sure everything is in order, he takes notice of Gloop exiting a sewage pipe, and yells at him to get away from his box. Gloop walks a short distance away, but it's not enough to satisfy the Knight. They continue arguing over the slime man's proximity to the box, which attracts the attention of the nearby Wrench. Gloop and Wrench ask what's inside the box, and the Knight furiously refutes that there is nothing in the box. Gloop "kinda believes him," but Wrench is still suspicious. As Gloop and Wrench continue their discussion, the Knight takes the opportunity to sneak away to the Dirty Diamond.

After some initial hesitation, the Knight begins to (very loudly) crawl on the floor in an attempt to infiltrate the establishment. He is almost immediately spotted by Cleo, despite his best efforts to hide behind a pillar. Still, he attempts further "stealth," attempting to distract the Dirty Diamond's staff members by throwing a coin, then frantically leaping behind the bar. His crash landing alerted all of the employees, however, and they promptly threw him out.

The Knight heckled Cleo and Nia before stomping off in to an alleyway next to the Dirty Diamond, plotting to rob the place. After witnessing his theatrics at the nightclub, Vee follows him to his hiding place. The Knight starts hissing at her and moving deeper in to the alleyway, but this doesn't faze Vee at all. He takes notice of Vee's glowing eyes and sneaky demeanor, however, and surmises that they are one in the same. The two decide to work together to infiltrate the Dirty Diamond, with the Knight asking around for information, and Vee looking for a path to the catwalks above the streets. Vee locates the ramp to the catwalks, but as she's leading the Knight up there, she slips and falls to the ground. The Knight jumps after her in solidarity, landing with a crash that attracts GU1D3-B0T and Tynan. Vee chases GU1D3-B0T away to his hotel, leaving the Knight alone to traverse the catwalks himself. Gloop sees the Knight walking along the catwalks, and yells up to him, asking him if he's a synth. The Knight replies, "What's a synth?!" and continues on his mission... He then slips off of the catwalk, crashing directly in front of the entrance door.

On Season 2 Ep 2 he fought in the thunderdome arena of Scrap Town, hosted by Hark Deadwood and Proximo. He faced off against Ryzy and lost when he was dispatched in mere seconds.

Due to it being the 2 sides of a coin i decided to mention it outside of restriction of Edges and Flaws. Soul Binding. To soulbind, one must draw a smiley face with blood on the inside of Polka's armor. Erasing this smiley face does not remove the soul binding effect. Once the smiley face is in place, the soul binding is permanent until the key phrase is stated. The key phrase to unbind one's soul from Polka is: Sanheim Dicky Bicky. Upon soulbinding, the lives of both parties are dependent on each other. Should Polka die, his partner will die. Should his partner die, Polka will die. They do not share pain. Once soulbound, if Polka's flame is extinguished there is a period of 30 minutes where the other soul can reignite his fire. If the flame is not reignited, both parties will die. You cannot unbind from Polka when the flames aren't lit.

In need of some assistance... outside the smithy. Jyggal doesn't seem to know how to deal with this

Blacksmith P47-CH35 "Patches" and the Knight 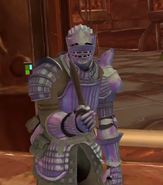 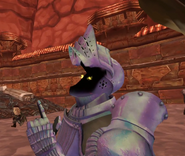 The knight popping open his helmet

Telling Sean how to "summon Crotchula" at the wasteland oasis 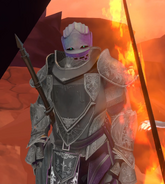 Polka is turned into a human by a fire spirit 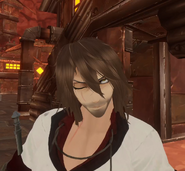 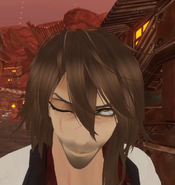 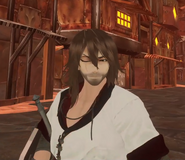 Diagnosing Relic Dusterson with having a "loose butthole"