Shura Kaiser is a young vagabond who settled in Scrap Town to make use of his wasteland experience for cash.

He is mistrustful of most, but finds himself drawn to those in the same circumstances as he and will gladly join hands with them. Shura is easily distracted by his nature as a gourmet alongside his goal to taste every creature in the Wasteland. He dreams of one day opening a public shelter so that any orphaned or homeless will have somewhere to rest their head rather than trying to survive in the wastes as he did.[1] 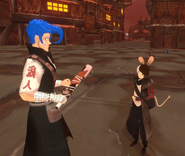 Shura shows his sword to Maxie the blacksmith 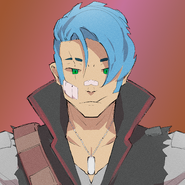