"I don't get it." ― Shrimp, during most conversations.

Actual shrimp, he just works out

Hidden behind "Deal with it"-Glasses

Shrimp is a variety streamer on Twitch. In VRChat he is most known as a roleplayer portraying his crustacean persona Shrimp and many other comical characters.

Close to the end of 2019 he started wearing an anime boy avatar with a large mustache more regularly than his usual Shrimp persona. In 2020 Jor made him a low-poly pink bean avatar to fit one of his Twitch emotes until adopting his "Mustache guy".

Who is Shrimp - The character?

Shrimp is an absent minded, incredibly fit, dumb-ass crustacean. Like most filter-feeders, when looking at him, at first he might not seem much for the world but if he does you a favor he will attempt it to the best of his abilities.

When focusing on a task he always 'tries' to give it 110% at the start, but ultimately, work isn't his strong-suit.

When he began hanging out with Roflgator (Rob), he became the frequent target of sarcasm and several dates pre-destined for failure. One of Rob's key wing manning attempts that takes the cake was when Shrimp was successfully trapped by Sorry on February 26th, 2018.

Listening to Shrimp talk, it's clear that he looks up to Rob and has his own unique ways of expressing it. For example, during the so-called 'Harem wars' between Chipz and Rob on February 26th, Shrimp went so far as to take the appearance a robot in order to impress Rob to join his posse.

At the Great Pug

Shrimp lived in the back storage room in the Great Pug at the courtesy of Rob. He paid no rent and had been living there for so long that some speculation surrounding the reasoning behind it began to grow. Nevertheless, Rob tried to kick him out and give the storage room to Space Whale after the Don Vincenzo Calzone Mafia fiasco, but Shrimp earned his stay by saving Emerysaur from the grasp of mafia gangster 'Uncle' Tommy, and also by becoming the Great Pug's new janitor. Oh, he also stored his stash of drugs back there.

Since Rob's Great Pug burned down, Shrimp has been sleeping in the bathroom at the Lair of Roflgator. Whether he also has a secret drug stash here is unknown. After dumping Buza after experimenting and dating for a short while, Shrimp would eventually hook-up with the Crusader knight, NotValco. Shrimp would also join The Polygon PD and Rob's motley crew of bandits, the Cringetown Cucks.

After months of serving as vice president under President Jor Rilla, Shrimp would serve as Jor's running mate during their re-election campaign in the Summer 2018 Elections. Rob, whom was also in the race, attempted to use Shrimp to sabotage Jor's campaign, to limited success. Nevertheless, both Rob and the incumbent Jor would both lose to the newcomer GabouLit in a massive upset. Gab would select Shrimp's lover NotValco as his VP. However Gab's presidency would be chaotic and short lived, leaving Valco to assume office. Just days later, Shrimp would reveal that Valco "gave" him the presidency, likely due to the fact they're lovers. It is unknown if Shrimp coerced or tricked Valco into it, or if Valco willfully did it of his own volition.

Shrimp would choose Astree as his Vice President. On July 14th, 2018 in a fit of petty politics, Shrimp would temporarily ban all "Knights" after catching his lover Valco in an apparent affair. President Shrimp after earning his position slept in a tent at the property of the The Golden Gator.

He was recruited by Mayor Crocolol of Bricktown on Oct 7th, 2018 to serve at the newly opened Police Station. His position is Deputy-commissioner under Astree and Morocco.

During his first work-day he spent his day eating and since Astree wasn't available, he hired a new recruit with a questionable background. Immigrant Block would join the police force.

He participated in the beach competition on May 13th 2020 and took home the win.

On Aug 26th 2020 he turned up at The Golden Gato dressed as a "Neko" and believed himself to be the manager and filled the roles shoes immediately by starting to boss people around. He eventually learned that J4key actually held the manager position to which he was offended and strutted out angrily in protest. Without his knowledge he was later given the title of manager, although in truth everyone was just playing along, letting him think what he will. He would also sneak into the meetings of Roflgators Council of Evil aka "Evil Alcoholics Anonymous" and instead of attempting to get rid of him, it was easier to just let him become a member.

The smart business man he is he seized the current VRChat meta of all the personal mutes becoming successful streamers by hosting his own mute dance streams. The mutes days in the limelight are now clearly numbered! Watch out mute cat girls, you've got competition, the best dancing neko in town is Shrimpy! "Nyah! UwU"[1]

Shrimp has a tendency to say improper things at awkward moments and an ability for his mind to wander off randomly. When he loses his train of thought he's either confused by the matter at hand to great comedic effect or he's completely forgotten what you asked of him. Unfortunately (for him) this makes him easily manipulated, though, truth is, he'll do just about anything for money. Kinda like Rob.

Unlike other humans or semi-humans in VRChat, Shrimp doesn't eat regular food. His cuisine is similar to regular filter feeders. If you ever waiter him and ask him what he would like to order - you will NOT like his response.

Todd is Shrimp's rich cousin. He speaks softly and kindly with a Chicago-like accent and works as a stock broker. He does not see eye to eye with Shrimp and wrote him out of his will. He calls Buza a buzzard.

He loaned a large amount of money to Roflgator on July 16th to support his Gator Bar and movie recording ventures Mushy Apples. Together with Shrimp, Roflgator planned to off-him or steal his money but when he took off his shirt they changed their minds.

While wearing his shirt he looks almost identical to Shrimp except for his mustache. When he takes off his shirt he... looks a lot beefier, appearing to grow in size.

He has fought in the bloodsport battle arena in The Lair of Roflgator multiple times. At the Golden Gator, Todd has been called on by Shrimp to assist in fighting off threats.

On Oct 24th 2018 he together with Doom Guy managed to defeat the escaped Red Man having possessed S0ra.

The Bike Helmet Guy appeared at The Golden Gator on August 12th, 2018 wielding a baseball bat covered in blood and refusing to speak. He had altercations appearing to beat Sorry and threatening Ikumi putting him on Roflgator's radar.

Shortly after his appearance people started disappearing including Jor Rilla and NotValco. They later returned as as robots appearing to have been murdered and having their memories backed up into robots. In the end it was all just a misunderstanding and they were not really robots. Tiny Jor was hiding inside Robot Jor all along and Robot Valco was a copy.

Richard is a loving but obnoxious individual. In his mind everyone thinks highly of him and adores him - it's a privilege for anyone to have him as their friend.

Throughout Nov 20th 2018 he shadowed poor SciFri providing "criticism" and "insightful" commentary to everything he was saying or doing.

He made a sudden appearance and protected SciFri when he was introduced to Kasumis demon family on May 26th, 2019 and her relatives got overly rowdy. Specifically her father got hostile towards SciFri when Richard released his fists.

Whenever SciFri comes around, Richard tends to just suddenly appear.

This crazy person walks around wielding a spoon and makes passive aggressive threats or requests of "scooping" peoples eyeballs out.

He first visited The Golden Gator on Dec 6th, 2018 and made a revisit in Feb 2019. When he revisited Roflgator had recently lost his head of security Tanner and attempted to hire George in his stead but it didn't seem to work out.

He somehow managed to scoop Spellboy on Feb 4th, 2019, effectively leaving him lacking an eye.

"Worm" in-character is generally a mute who creeps up on people making strange disturbing gestures and stares at them until they become uncomfortable.

His name is actually unknown, "Worm" is just some nickname Roflgator refers to him by.

"Buzz off!" ― The Gatekeeper

A royal guard for King Henry he guards a small village in medieval Great Britain.

He made his first appearance in Elimination RP on April 13th, 2020 keeping miscreants out. A skeleton portrayed by Mute Max and an alien portrayed by NotValco tried to "pass into the village" but he kept hearing it as "piss in the village" and of course, denied them entrance because of this.

Highlight: Aint letting anyone piss in the village

Returning on April 15th 2020 Shrimp streamed portraying the guard again, this time a vast multitude of characters tried to make entrance. A certain orc portrayed by Jor Rilla tried to gain entrance countless times for various reasons as well as "pillage" and kept getting denied entrance. Another Elimination RP was held on Nov 2nd 2020 which also saw the return of the pillaging orc.

Highlights: Gatekeeper RP and Return of the gatekeeper

Jarvis Bellworth is the Manager of Public Relations for the Nirvana Corporation in Savior City. He is a living brain-in-a-jar inside of a synthetic body. Jarvis is Shrimps character in Callous Row RP. 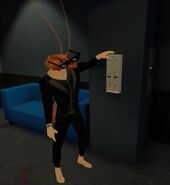 Shrimp in the lady's restroom at the Pug

Look into my eyes, Shrimp... 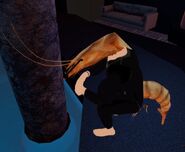 Shrimp and Melz playing together on June 26th, 2018

Shrimp on a movie set

Sorry tried to cut shrimps hair and had an accident...

Gary Crustacean, another of Shrimp's cousins (portrayed by Shrimp) tasked with chasing down criminals at The Golden Gator.

Shrimp fighting off invading lolis during the loli invasion of Aug 28th.

At Necro Nights with Jor and Valco wearing fitting outfits. 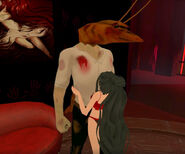 Shrimp and Jipe at Necro Nights 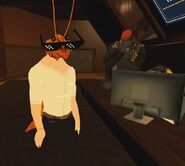 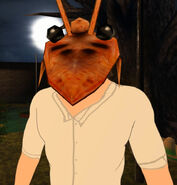 "El camaron" in The Gay Bar vs The Swamp RP arc

Participating in Miss Royal gator as the pink bean 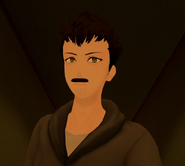 Sneaking into the "sexiest woman" competition April at The Royal Gator

Shrimp shaved his mustache. Attending the The Golden Gator 2020 reopening in the Bricktown "crackhouse" 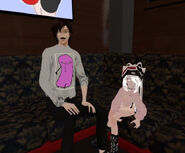 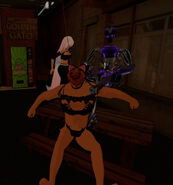 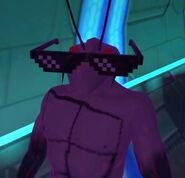 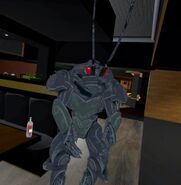 One of Roflgator's clone backups, Clone 27 got a copy of Shrimp's memories downloaded into it 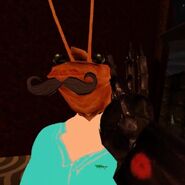 "You're rich you say?" -Roflgator

Todd after taking his shirt off

Todd taking off his shirt and fighting AJLiddell

Todd in a Battle of the Gods with AJLiddell 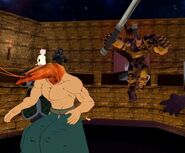 Who hell is this bloody Bike Helmet Guy? 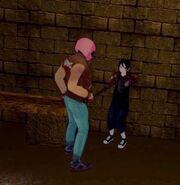 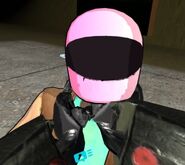 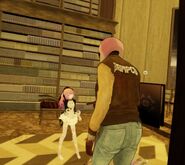 Appearing in Arcadums school of Forbidden Knowledge staring at Elise.

Grabbing and taking Dixos skull Jeffrey from him. 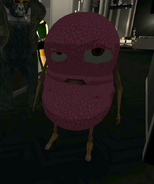 Poor Spellboy after being scooped by George...

The main villian "Schlord" spotted at The Platinum Meechler. Can you see him? 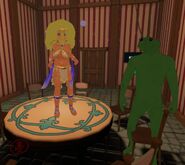 Worm and his bro Worm2 ? 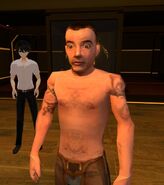 Eyyyyy Taylor!!! Taylor is so cool isn't he? 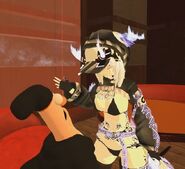 Worm gets a dance from Darling 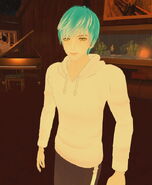 "Slippery!" -Bobby warn's that the floor is slippery

Bobby the cleaner working at the Necro Nights re-opening 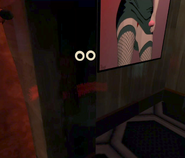 Bradley Kickass is a chad 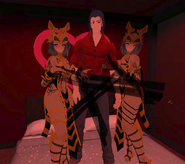 Bradley Kickass gets all the ladies 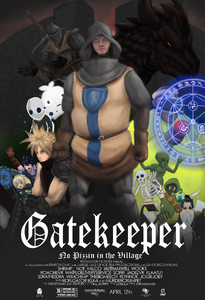 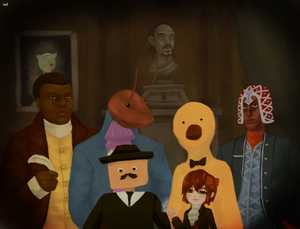 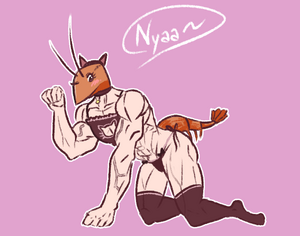