Rat (Given by Chad StealthRG's chat)

Shizuko Nanteko is a student at Ascension Academy with light blue fur and a tail. She is shorter than most of the students, doesn't wear any shoes, and speaks in short sentences.

Shizuko appears to be a young fox spirit that seems to have somehow trapped her spirit in between transformations. She speaks softly and is expressionless unless talking about the spirit world, magic, or snacks. She loves snacks. In fact, she loves everything that has to do with snacks and those who give her snacks. She came to the academy in hopes to learn about the vast knowledge of militant training they hold and to maybe learn to feel care and emotions for others again.

Shizu is a native of Saigon where her flame inside of her shrine is from. That flame was lit by someone in her homeland and it appeared when she got her 3 tails. Tails are a symbol of status how much you learned and grown as a Kitsune. Her mother had 9 tail and never shifted into her humanoid form, she was as big as the top of the bell tower and she will sit inside the shrine and that why their shrine is called the moving clouds shrine because when she stick her tails out people from down below though that her tails where clouds. She usually stayed there all day taking care of her 10 babies. According to Shizu their Kitsune community is not allowed to contact the spirit world until they are at least 300+ years old.

In her family you don't reach maturity until you are 400-500. She was trapped in a void when she was 367 and when she came out of it she didn't have emotions. She was the youngest of her family to transform at the age of 200 and something a really remarkable achievement taking in account that the normal age would be in the 300's. 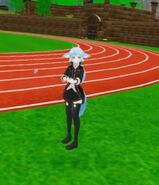 Shizu injured after the crypt run

Shizu with the Twig Knight 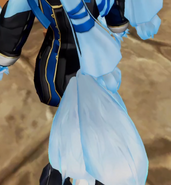 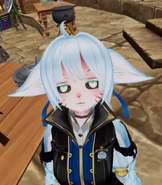 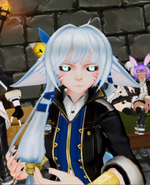 Big Shizu after the shrine mishap.

Shizu with Chipz and Minerva 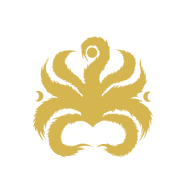 Shizu with Lorn and Chipz on her birthday party

Shizu and Gavin on her birthday party

Shizu with Carver on her birthday party

Shizu and Gavin in her bedroom