5'7"
Shiloh is an inventive decker hailing from Scrap Town who spends a majority of his time constantly moving.

Whether he is working a shift at the Oasis Grille or visiting friends far within Salvation City, Shiloh spends his day with the ultimate goal of having a fun time. But once the sands start raging, Shiloh spends his nights furthering his decking research so that he can do his part in making Scrap Town a safer place.[1]

Shiloh Down is a scrawny little boy. Straight up. Measuring at a whopping 5'7, he is the definition of a short king. Raised on the streets of Scrap Town, he runs around meeting as many people as he can to make as many connections as he can for his reporting job. Someday he hopes he can make it big in the reporting industry and get noticed by Trident Corporation. 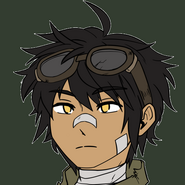 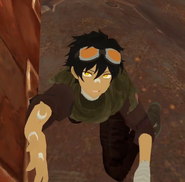 Shiloh Down asks for assistance to get up the ramp to the thunderdome arena from Sten, having broken both of his legs

Odd and Shiloh at Jyggals

Selling scrap at the smithy

Showing his BB-gun engraving to Sean and Sten

Writing on his phone / datapad