Scootz was an old man who used to run the General Store in Scrap Town. Known for his loud mouth and cynicism he may not have been the most liked by the townspeople but he did provide an essential service to the town.

Scootz was born and raised in the Wasteland. He found work by going into the desert in search of scrap and trinkets, selling what he finds. Scootz lost his legs in a failed scrap run so he used a specialized cart to get by.

Scootz goal is to continue building onto his cart as it is his livelihood. Customers might be put off by his appearance or his attitude towards them. Being in the Wasteland for so long mostly by himself has damaged his mind, so his memory, intelligence, and emotions are scattered.

Settling down after being a wandering salesman he started a business of running a general store, selling all sorts of goods in Scrap Town together with Catherine Drake. He met the synth Foobar who wandered around aimlessly and put him to work to aid him in the store.

He joined in the expedition to scavenge The Golden Lance, crashed spaceship in Season 2 Episode 9.

In Season 2 Episode 12 he was shot and killed buy the raider Darius during a scrapping run with Sean and Sten.[1][2][3]

The day after he was given a Viking burial of sorts where his cart that he had equipped with a self-destruct feature - was put to use. In the end he went out in a blaze of glory.[4] 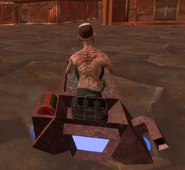 Encountering Rebecca at the oasis with Sean, Trey and Mercury 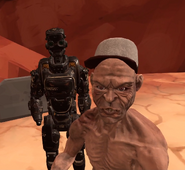 Retrieving his repaired cart from the blacksmith

On an expedition to The Golden Lance crashed spaceship

Ranting about the golden lance

In the shop with C3

Visiting The Hookah bar in The Undercity air district, Jyggal says the first sample is free 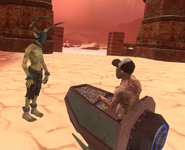 Scootz gets shot by the raider Darius