Medic at the Scrap Town hospital

Savire is an Arachne that came from an underground colony in the wasteland who now work at the hospital in Scrap Town, a settlement on the outskirts of Sanctuary City.

Taking care of people is what she wishes to do most here, that being said she is no stranger to cruelty and violence when it's needed.[1]

Savire is an Arachne that who used to live in cavern colony below the dunes, till one day a band of Scrappers encountered a hoard of fighting sand worms and caused a cave in. Savire was the only survivor and lost a portion of her memory in the cave in. She was found by the surviving wastelanders and brought to their settlement of Scrap Town on the outskirts of Sanctuary City, and has lived there ever since.

She has difficulty speaking with others about her past living in the now collapse caverns, often avoiding the subject entirely after a few moments of confusion. It is not in her interests at the moment to any alliance with a particular party, as she simply wishes to treat people to the best of her ability, thought if an enticing offer is made perhaps she may changer her mind.

After a year of living in scrap town she stared working in a clinic, aided in the death of a runaway corporate guard, by consuming him. Made a strange magic lizard lady friend and got engaged to the town mayor Henderson & McCuldger, and barely avoided the attention of several corporations. She proposed a medicine trade between Doc U, the row clinic owner and scrap town. Sharing materials in exchange for requested and difficult to obtain medicines. 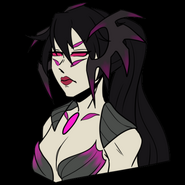 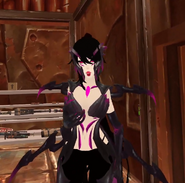 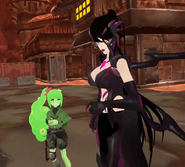 Treating Minto after rescue from raiders

Henderson and Savire speaking to Sten