Don of the Dragon Mafia

Sapphire Krieg is a turned crystal dragon that found herself in the city of Zaphira after escaping the clutches of the evil Dr. Jasper. Sapphire was turned by Everest after her desire to become a dragon just like her new family and friends around her. She herself formed many groups known as the "Dragon Mafia" and the "Round Table". She has even created a world thanks to her Imagination Magic, and came into possession of an Afterlife, dubbing her as a mortal deity.

Sapphire’s mother, Bethany Alaridce, was one of the ruling bodies in Aternia (country/city not yet identified). Her family was one of great magical strength, but what many people didn’t realize was that there was a dark secret in how the Alaridce Family gained such magical strength…

The Alaridce Family were prone to having twins, but that was not common public knowledge. A twin was always sacrificed in a secret ritual, binding their soul to an item that would help the other’s magic strengthen greatly.

A neighboring ruling family (the Highmoores) were also given twin sons. To connect the two families and have the magic between them grow more, Bethany and one of the sons (Richard) were arranged to be married, while the other two twins were to be sacrificed and put into two new magical items for both Bethany and Richard to use.

Bethany and Richard despised the practice and vowed on the day they were wed to never perform it again. Aternia was peaceful and there was no need to sacrifice family for power. They both sought to figure a means of restoring their siblings and to bring them back, to free them from their prisons.

One day, the couple were approached by a man who claimed to be from another world. He introduced himself as Doctor Jasper Philips, and he explained he was studying souls and their effects on the world around them. Originally, he approached the couple due to the familiarity of alternate versions of them from other planes of existence. According to him, the couple and Jasper were always fighting with each other, and these fights often ended horribly. The couple expressed that they didn’t wish for that to happen and upon hearing of his study of souls, explained their situation to him. He agreed to help them, but they needed to do something for him in return.

The Doctor brought a young boy with him, who appeared to look like a younger version of him. He explained that the young Jasper lost his own family and had great magical potential, but couldn’t use it alone. He told the couple that if they raised him and took care of him, he would assist in figuring out a way to break the souls of their siblings out of the items they possessed. The couple agreed.

Many months later, Bethany was pregnant. At this time, the Doctor left the world of Aternia to find more answers to help the couple, and Jasper was becoming stronger and gaining more control of his magic. When Bethany gave birth, the family was shocked to discover that she was only birthing one child and not two. The baby was called Emily, and she seemed perfectly healthy at first. Until it was discovered that the baby had too much mana. Emily could barely breathe, and draining the mana wasn’t working properly. The only solution was to give her an artifact.

Bethany and Richard argued against it, saying that they refused to conduct such a horrible practice again. As they fought, the older family members grabbed Jasper and dragged him to the basement of the palace where the rituals often took place. After hearing his screams, the couple ran to the basement, only to be too late. They saw Emily now perfectly fine, with a book floating nearby. The couple cursed and shouted at the family members, even telling them to leave and to never come back.

The Doctor returned but upon hearing and seeing what had happened to Jasper, he felt betrayed. Angry. He threatened them with revenge and left in a fit of rage. For years, the couple lived on, raising Emily and trying to tell her false stories on why she needed Nirvana with her, and why they needed their own magical items. They were also fearful that any day, the Doctor could return…and eventually, he did.

When Emily was only a few years old, the Doctor barged into the manor. He killed everyone around him and finally reached his targets. He relentlessly slaughtered them in front of Emily, taking out all his anger on them. He took their souls and bound them into their items, before kidnapping Emily and taking them away.

She was experimented on for many years until she managed to escape. She found herself in the Metaverse, where she met Uncle Joe for the first time. She continues to live on, using her magic to create and cause Dreamtopia to flourish while also stopping Doctor Jasper’s plans.

Sapphire is courteous and caring, often putting others before herself in many situations. She always asks before giving her friends hugs and headpats, considering personal space. She's also very generous, always giving gifts and money to those in need or just to cheer people up when they're down. Considering her past, Sapphire knows how to handle delicate situations of past trauma, and is often the one people go to covering the topic.

Since Sapphire seems to care more about others than herself, this often causes her to become stressed out and forget to care for herself or consider her own feelings in situations. Sapphire is often gullible, taken from her caring personality. She might accidentally befriend the wrong type of people ("Mr. Friend", as an example).

Sapphire is slightly paranoid and often has moments where she stops and questions what is real and what isn't. This is thanks to her Imagination Magic not being fully controlled back when she was younger. When Sapphire experiences a sense of unreality, she will begin to panic. This is one of the reasons why Sapphire doesn't like liars or people who spread misinformation as a joke.

Sapphire meeting with her grandfather Somnus.

Sapphire, petting one of her Dreamtopians on the head

Sapphire in one of the many locations in Dreamtopia.

Sapphire and her knight Lancelot.

Sapphire and her castle.

Sapphire on her throne.

Sapphire and Darrell lost in an unknown world, after Doctor Jasper dimension locked them. 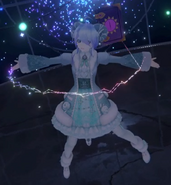 Sapphire and Nirvana, a day after returning home from being kidnapped.

Sapphire filmed during the burning of a 400 year old Wal-Mart in Zaphira City. 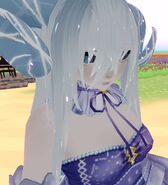 Sapphire in one of the many locations of Dreamtopia. 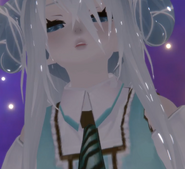 They grow up so fast.

Sapphire in her cat form, courtesy of Jae.
Community content is available under CC-BY-SA unless otherwise noted.
Advertisement