Drawn on Orange.
Samuel aka 7 is a dark spirit who live in Callous Row working as what is essentially a snake oil salesman. He collects magical junk and tries to sell it off as something of worth. He lives a poor lifestyle because of this, literally diving through dumpsters to scrap together cash.

His purpose is to actually learn how magic works and run the shop better than the previous owner, while avoiding being returned to Talaris. He is portrayed by Hopelessbay.

Since his death another strange spirit known as "Burrito Benny" with a similar device sticking out from his head made his appearance selling street food burritos. If this is Samuel or another apparition reanimated due to the same injector remains a mystery.

Samuel is a dark spirit given form by a mysterious injector in their head created by the Talaris Corporation for unknown reasons. They cannot remember when they were made or even why, but they remember running out of the building, crashing into an alley, then nothing. After coming to, Samuel tried asking others for help or any kind of information, but the lack of face and dark figure terrified anyone they attempted to talk to. In desperation, Samuel found a piece of cardboard and a discarded crayon from a nearby restaurant, and quickly made a makeshift face. After rummaging through a few more dumpsters to find anything resembling clothes, people were finally talking to them, even with the still unnerving appearance and smell of garbage.

Eventually, Samuel found themselves hanging out with local scammers who would smooth talk their way into selling people junk. Not a classy living style, but Samuel didn’t know any better and started to learn from them. They couldn’t make any money off Samuel as they were, so they took them in to teach them the ropes. Slowly….very slowly, Samuel started picking up on how to talk their way into and out of things. Selling junk to people, getting info out of people, getting their way through pure conversational prowess. This all culminated into Samuel opening a “shop.” While not a conventional, or technically legal, shop, Samuel would begin to sell all kinds of things.

One day, someone from the Savor City Coven stumbled into Samuel’s shop. While Samuel wasn’t fully sure of what they were, this person did. They recognized Samuel as some sort of strange magical being held together with technology infused with magic. Samuel, using tactics learned from the streets, was able to pull some information out of them, learning that they were a dark spirit. This opened a new world to Samuel. They learned of magic and the possibilities they could bring. So began their interest magical items. Learning about magic is a difficult task. Magic is resurfacing and many don’t know what they can do with it. Samuel’s new interest lead them to seeking out magic items so they can tinker with them to hopefully learn more about it.

To Samuel’s dismay, he actually had competition. Hodd Toward, another man who would sell random junk worked not far from Samuel. Even better than Samuel because he actually repaired the items. Samuel grew jealous and tried to best their competition...but people rather have fixed junk. Suddenly though, Hodd Toward seemed to just vanish. Samuel had no idea how or why, but they all didn’t care as their main competition was gone! Samuel went to where Hodd’s shop was to find Bethany Esda still working. Using their scamming knowledge, Samuel convinced that they were the new own of the shop and was to work with Bethany. Using the advantages Hodd left behind along with their silver tongue, Samuel was ready to take on a real shop. Maybe. Probably not.

He was seemingly accidentally killed by Bethany Esda who unscrewed the injector protruding from his head. Upon doing so his body disappeared, leaving just the remaining device. If he can be restored to some other body or form in the future remains unknown. His best friend Dagu took his death harshly, mourning his loss together with Cleo. [1]

A strange burrito street salesman named Benny with a very familiar looking "injector"-like device stuck in his head made his appearance in the row. He has since opened up a burrito stand outside of Rooks bar that attracted a lot of recognition.

A magical spirit of sorts his face remains hidden behind a paper bag with a face drawn on it.

His burritos are very popular and near addicting to the local inhabitants. What are their actual ingredients? Who knows. 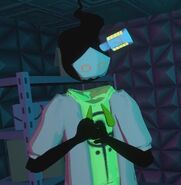 Samuel, Dagu, and Bethany Esda agreeing to work as informants for Rook (CR).

Dagu mourns the remains of Samuel 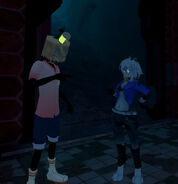