The SWEEPO Cleaning Company is a large corporation in charge of keeping the streets of Sanctuary City clean, including the slums of The Row. If someone leaves trash anywhere its only a matter of time before a SWEEPO comes by and cleans it up.

They employ an army of automated cleaner robots known as "SWEEPO":s. They're a not a Mega-corporation and their alignment to the other corporations is unknown.

Rumors are that their cleaner robots have more nefarious purposes included into their programming.

When a dead body is left in the streets the SWEEPO:s will clean it up, but who knows where all the trash truly goes? Possibly it's dumped somewhere in the wasteland of the planet of Corvanis 3. 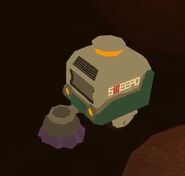