Not to be confused with Gregarious Talon Rook from Callous Row RP.

"At any cost" ― Rook final words

Rook the Rock (By Picwik)

No gender goes by Male

Purple with a Pink streak

Rook is a Golem who is a student at the Ascension Academy. Their arms and legs appear ethereal and seem to be magical of nature.

Being a Golem means that they're a magical construct of some type, not being born but created. Golems in general are given life by powerful wizards who reanimate inanimate forms by infusing them with a soul originating from a living being. Golems can be made by various materials such as metals, stone, mechanical, clay, pure magic or even of shaped flesh.

Rook was created in the 1900's by humans and elves as a collaboration to prove that both races could work together. After being built as a proven success he was placed into National Arcane Research Agency, NARA. Within the facility Rook was charged with archiving the magical items and spells that were created within the facility. Whenever someone needed one of these spells or items he would retrieve them.

Rook was admitted to Ascension Academy with many other students. Rook knows very little about humans and social interactions and is constantly learning new concepts and words. He was taught the word "Sexy" by Chipz that he began to use in unfitting situations. Rook later appeared to hit on Arbor telling her that she stands out like an enchanted Rock. If he actually hit on her is difficult to determine but after this Picwik wanted to call him "Rook the Rock". 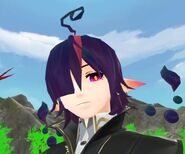 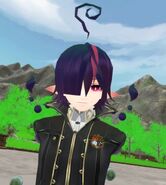 Rook asks Augusta if she consider him "sexy" next to Specca.

In a crystal cave with Esmae and Chipz. 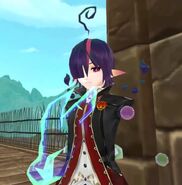 With Jixie at the enacted barrier around the school.

Working with Victor in an obstacle course.

Dunking Ryder in the water fountain. "It's Rook Time!"

Rook and Chipz in the range arena

Rook flexing his six arms in the Blackguard fortress during the Aldoria Mission
Community content is available under CC-BY-SA unless otherwise noted.
Advertisement