"Romulus" or, as he calls himself, “Rom” for short is a salesman of many things. Little is known about him to the people around him. He holds his cards close to his chest as if he's scared to make friends or let people in. He has a dark past but a bright future.

With revenge and redemption on his mind, Rom will stop at nothing to get back to where he was. But due to the walls he makes for himself and his drinking problem, it's going to be very hard. In the end it's all about money and status, nothing more. People are not trustworthy, but money is forever. 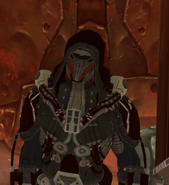 Romulus and Pepper
Add a photo to this gallery
Retrieved from "https://vrchat-legends.fandom.com/wiki/Romulus?oldid=87849"
Community content is available under CC-BY-SA unless otherwise noted.