"From here on I have become evil... again. Old Rob is back." ― Roflgator

The Evil Council is a roleplaying arc invented impromptu by Roflgator on Aug 7th 2020 out of frustration for people not instigating enough conflicts or playing along with potential arcs.

At first he announced that he would be breaking RP, getting tired of other players in the lobby being "anti-RP", that "all RP is dead" and its all a lie. After ranting for a while he formulated his plan to turn it into content again by turning evil.

The evil council would eventually form an opposition against Crumpet after he acquired ownership of The Golden Gator and renamed it to "The Crimson Crumpet".

Formulating his plans he would start recruiting participants of a "council of evil." Return to the old ways of cucking RP to wing-man and bring couples together - only to break them up again at a later date.

MurderCrumpet was denied for not being evil enough but then told to fire Peppymint to prove his evil-ness. A counter offer was given to Peppy if she resigned from Crumpet she would be accepted into the evil council instead. Instead both were denied for not proving their loyalty.

Blu Haze was skeptical if Firefox Blue could be evil enough but she gave in, being Roflgator's personal mute she would agree to anything he wants.

Announcing that he had to prove himself worthy of the group Roflgator gave his 20% of the bar to Crumpet and in cutting ties to the bar he would feel better about corrupting it and stirring shit up. This made Crumpet the majority owner. Instead of owning the bar Roflgator would be taking over "The Big Loads Moving Company" with Knuffles as a front for the evil council.

Bearly eventually completed his task of getting the presidency from Joshy and was accepted into the council. AskJoshy gave a presidential adress, revealing his true murloc form and having Orcs and humans hunting after him for all his past crimes in Azeroth.[1]

Recruits into the evil council:

Using the Cafe as a front

On Sept 2nd Bearly suddenly shut down The Golden Gato due to "aids" earning him a very negative view from the council of evil and was not considered to be a member any longer. The sign in front of the golden gato was eventually torn down. Firefox Blue was given the task to distract Vincent X in the upcoming presidential debates as he had "reached new height levels in his ego" according to Roflgator. Fake bombs would also be installed in members butts to prevent any traitors.

An alliance with La Casa with Gulliblez joining was formulated and another meeting that turned into an Evil's Anonymous (Alcoholics Anonymous) style meeting. Because Jadez has the only car in Bricktown and its not fear to bum rides for free it was decided that they would use a swear jar to chip in for a car pool for Jadez. The next meeting would include snacks and drinks. Very evil decisions indeed.

Bearly in protest after being rejected announced he would be forming "The eviler council" and become even more evil.

On the second meeting new roles and jobs were given to each member to try and infiltrate The Crimson Crumpet and various weird jobs. On Sept 9th Roflgator regained owner ship of the bar from Crumpet.

A gangster from the past

Potential enemies from the past stop by the bar, in the form of Vinchenzo Calzone's brother, Binchencho and his wife Francheska (Java) and Roflgator has to reevaluate his allies. With the infamous mobster family putting down roots by purchasing property in Bricktown the evil council gathered and even invite Murder Crumpet as a potential ally. Gathering in another "Evil Anonymous" meeting on Sept 18th 2020 they try to form a plan to get the mobster and his cronies to leave.

Further information: Return of the Calzones 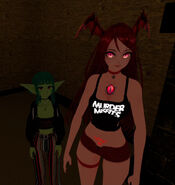 Peppymint and Crumpet are rejected from joining the evil arc.

Bearly is considered as a potential disciple

Knuffle joined the "Murder Misfits" in protest for getting kicked out